It seems that if you are a working filmmaker in America these days, at some point, you will make a mob movie. It’s Ridley Scott’s turn and his effort is ‘American Gangster,’ starring Denzel Washington and Russell Crowe.

The movie tells the story of Frank Lucas, the African-American mobster who is the right-hand man to one of Harlem’s biggest mobsters. Frank learns by doing, following in his bosses’ footsteps. So when he has a heart attack and dies, Frank takes over the business. Things aren’t as easy as he first thought- other mobsters or wannabe mobsters all try to move in on Frank’s territory. As he sees drugs running rampant through his city, Frank decides to make his drugs better and cheaper.

He heads to Vietnam where, through a military connection, arranges to buy large amounts of un-cut heroin and ship it to the US in the coffins of US servicemen killed during the Vietnam war.

The drug, dubbed ‘Blue Ecstasy,’ and Frank, become a huge hit. Big enough for the police to notice. Enter Richie Roberts. Un-popular with many of his co-workers after he turns in $1 million without skimming any cash off the top for himself or his partners, Roberts is a bit of a pariah on the force. While this doesn’t make him popular with the beat cops, it does make him popular with the law enforcement officials who are in the process of setting up the DEA. Roberts is recruited and placed in New Jersey. He quickly makes it his duty to find out who is distributing the deadly Blue Ecstasy throughout the region.

‘American Gangster,’ tells its story from both sides. You see the rise of Frank Lucas, you witness the first stumble of Richie Roberts. Director Ridley Scott cuts back and forth, creating tension as Lucas tries to lock himself away with Roberts hot on his trail. The film is rich in 1970s storytelling, even going as far to evoke ‘The French Connection’ by name. The movie is a typical Scott film; great set-pieces, excellent editing and, for me, mediocre storytelling.

It’s not that Scott doesn’t know how to tell a story, it’s just that he seems to have difficulty in making a movie that matches the scope of the story. ‘American Gangster’ runs almost three hours. Why? What’s the point? The movie is a cat-and-mouse chase film. Maybe Scott sees the film as more important than it is. Maybe Russell Crowe was gunning for Oscar #2. Whatever the reason, a really well-made movie is stretched to a point of almost ridiculousness.

This has been my problem with many of Scott’s movies over the years. ‘Kingdom of Heaven,’ ‘Black Hawk Down,’ even ‘Gladiator,’ I think could do with a little cutting. What does it say when ‘Matchstick Men’ is your most tight film? And it’s not that I didn’t enjoy the movies. However, a movie that runs longer than it should is like being cornered at a party by someone who has one interesting story, but insists on telling you three. 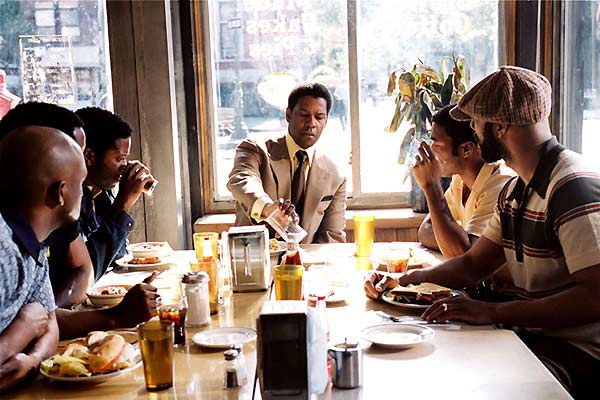 That’s not to say that the movie is not worth watching, or is a waste of time. It’s not. However, a half-hour could easily be removed without anyone really noticing. I’m not railing about this simply because I want something to rail against, but, really… why three hours? Scott’s film and, by deduction, his story, don’t require this epic running time.