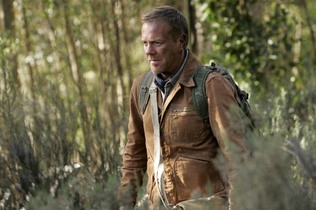 It was the end of the television season in 2007, and I’d hung on the entire season. Jack Bauer had been a personal hero since the first season of 24. I was an addict, so much to the point that I had a CTU mug and Jack’s messenger bag from season 4. At the end of Season 6, I was worried that my love for the show was fading. But despite the relatively blah season, I hung on, I still called myself a fan. Then when the strike happened, and Season 7 was delayed, I saw this as a glimmer of hope. Perhaps, this was what the writing team needed, a break. One season after another, they needed to erase the white board, and start from scratch. This hiatus gave us ’24: Redemption.’

Set in the fictional nation of Sangala in Africa, we join Jack as he is working at an American school, giving local boys a chance for a decent education. Unbeknownst to Jack, a military coup is forming, and the militia is kidnapping boys to use in their army. Back in the states, Allison Taylor is being inaugurated, taking the reigns from President Daniels.

When the school is attacked, Jack sets out to save the boys and bring them to the American Embassy, despite the fact that he will be detained immediately, as he has been summoned for an investigation into CTU’s interrogation tactics.

It would have been very easy for the story-line, no doubt inspired by events in Rwanda, to come heavy-handed and a little preachy, but it was far from that, the show not only entertaining, but informing. No matter what he does, Sutherland will forever be remembered as Jack Bauer, its a character he knows inside out, and never, ever fails to disappoint. Also worth mentioning was the appearance of Robert Carlyle as the head of the boys school, and Jon Voight as what appears to be the next “villain.”

I tried not to be excited for this, but I was, and I was not disappointed. If you’re a fan, you’ll be happy to know the DVD will be out this Tuesday, with an exclusive 17-minute intro to Season 7 (as if these 2 hours weren’t enough). ’24’ is back, and Jack Bauer is kicking ass and taking names.