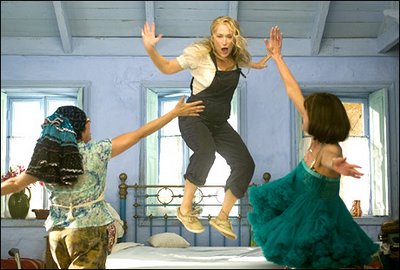 Islands in drama have always been mystical, mysterious places.  From the islands in Shakespeare’s “Tempest,” to Robert Louis Stevenson’s “Treasure Island,” every island seems to be rife with a lot of things that might not be found on the mainland.  Add to the list director Phyllida Lloyd’s film version of the hit stage musical, “Mama Mia!”

How is it mystical and mysterious?  Award-winning actors, not known for their singing voices break into song at every available opportunity.  The costumes are loud and bright, and seem diametrically opposed to the lush blue waters of the Greek isles.  And then there’s the choreography, which is clunky, obvious and overwrought.  “Mama Mia!” is an overabundance of things that are wrong, but, somehow, bizarrely enough, it all works.

Sophie, (Amanda Seyfried,) is a local Greek girl, working at the cozy inn run by her mother Donna, (Meryl Streep,) getting ready to marry the love of her life.  However, never knowing who her father is, and wanting him to give her away at the wedding, she stumbles across her mother’s diary and invites the three men who might fight the bill, (Stellan Skarsgard, Pierce Brosnan and Colin Firth).  Donna’s two friends, (Julie Walters and Christine Baranski,) are also on-hand and, as is usually the case in such scenarios and such films, high jinks result.

Combining the list of things I mentioned at the top of this review with the flimsy plot just described, it would seem like this is a complete disaster of a movie.  And, for the first thirty minutes it is.  The colors are rich and vibrant, but the difference between things shot on-location and on a sound stage are startling.  The acting is over the top to the point of being shrill from minute one.  The choreography is ridiculous, consisting, mainly, of literally acting out the lyrics.  The music is wonderful, but even it isn’t enough to save this sinking ship.

“Mama Mia!” is a wonderfully silly, amazingly clunky, shockingly terrible mess.  Somehow, for some reason, I recommend it.  -Sam