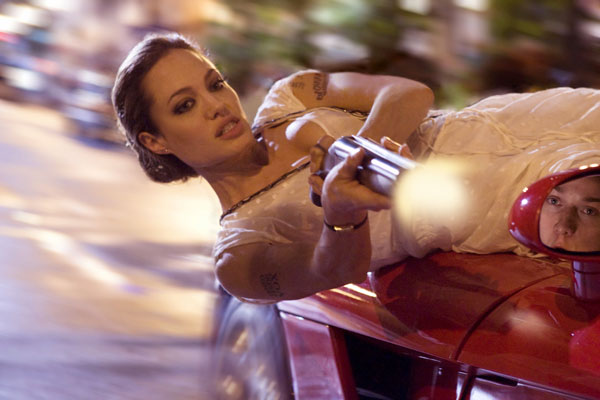 “Wanted,” the first English language film by Russian director Timur Bekmambetov is a scratch your head, I guess that kinda looks cool, but now I’m confused again kind of movie.  In other words, it’s a bit of a mess.

“Wanted,” is the tale of Wesley Gibson who is a boring guy, with a boring job and a boring apartment and a boring girlfriend and, presumably, a boring house pet.  However, one day, while at his local boring pharmacy, he meets Angelia Jolie.  And she’s cool and sexy.  And she tells him that the father who walked out on him before he was born was killed the day before.  And Wesley is interested.  And then shooting starts.  And it never ends.

Wesley learns that he’s a special breed, almost genetically pre-disposed to be an assassin.  Killing is his calling.  So he trains with a secret group of killers.  They teach him how to bend bullets, allowing them to go around one person and hit the person in front of them.  If they get wounded, a blind guy with a bit of a rat obsession has a special concoction of vodka and other nasty juices that you sit in like a tub to help mend you.  You go into a deep sleep or a coma, (the movie really doesn’t say,) and when you wake up, the top layer of the vodka juice has congealed and you need to break out in dramatic and slow motion.  There’s a chase that involves driving a car into a train, a betrayal and revenge and then the credits start to roll.

Bekmambetov has a style that is kind of amazing.  As he’s trying to wow you with insane special effects, slow motion shots and stop motion and a bunch of other cool things, he’s also at the same time kind of blasé about it all.  It’s a bullet that opens up and passes right in front of the camera so that you can read the writing on the casing of the shell.  Yawn.  (Presumably the yawn would be done with a Russian accent.)

Angelia Jolie is sleek and sexy, but she’s also cold and you never really understand her despite a flashback designed for the sole reason of the audience to say, ‘wow, now I understand her.’  James MacAvoy, (best known for sending Kier Knightly a letter containing the C-word in “Atonement,”) is kind of floppy and dull.  Morgan Freeman plays a variation of his now patented God role, and yells a lot and stands very still while delivering his lines, but it’s nothing special  This film is a battle of who could care less.

There’s also a whole plot device involving a loom, which is, unless you can think of another one, the first time the item that your grandma uses to make those sweaters everyone hates is a key element in an action movie.

I’m not opposed to action movies.  Hell, I’m not even opposed to stupid action movies.  (I’ll defend Sam Peckinpah’s “Convoy” with my dying breath.)  However “Wanted,” wants to be so smart and so clever, that by the time it reaches it’s conclusion, you don’t care or, worse, you can see through their ridiculousness.)  It’s the opposite of ‘so smart it’s stupid,’ or even, ‘it’s so stupid, it’s smart.’  Sadly, “Wanted” can only muster the ability to sigh out one sentence: ‘it’s so stupid, it’s stupid.’  -Sam