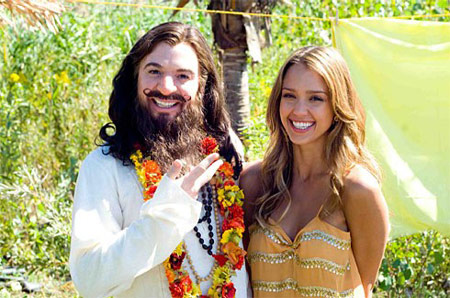 To read the reviews when  “The Love Guru,” opened in theaters, you would have thought that comedy as it is known had ceased to be.  While this movie is un-funny, uncomfortable and overlong at 88 minutes, it is not the end of comic cinema.  And while it may not signal the end of the Mike Myers era of comedy, it certainly requires that last rites be administered.

The short-short version of plot summary is as follows: the Toronto Maple Leafs are close to winning the Stanley Cup.  Their star forward is having marital trouble.  The team’s young and attractive owner calls for a guru to act as a love doctor for the player.  To spend any more time on the plot would be over-thinking it, something that Mike Myers and co-writer Graham Gordy certainly didn’t do.

This movie is a child, desperately trying to get your attention and when it does, it hits you in the crotch.  When considering what went wrong, it’s almost easier to list what went right: nothing.  I did not crack a smile during this movie.  I did not see something on the screen and think, ‘that’s funny.’

The film contains the following:
Multiple crotch shots
A midget being thrown around
A joke comparing the weight of midgets to the weight of awards
The repetition of the mantra ‘Mariska Haritay.’  No joke.  Just the repetition of the name.
Elephants mating.  On ice
Numerous jokes about the size of various person’s genitals
Mike Myers killing a rooster
A manager named ‘Dick Pants’

I know what you’re thinking, ‘well, if it’s that terrible, I really should see it.  I enjoy watching terrible movies.’  No you don’t.  You enjoy watching movies that are unintentionally funny.  The word ‘funny’ should not be used to describe this film, even if preceded with the word ‘not.’