The first picture from Johnny Depp’s new movie, based on Hunter S. Thompson’s lone published novel, “The Rum Diary,” has been released.

The movie stars Depp, Aaron Eckhart, Amber Heard and Richard Jenkins.  Bruce Robinson is directing.  “The Rum Diary,” tells the story of journalist Paul Kemp, who resorts to alcohol and sex to pass the time while working in Puerto Rico.  Tough work, but someone’s got to do it. 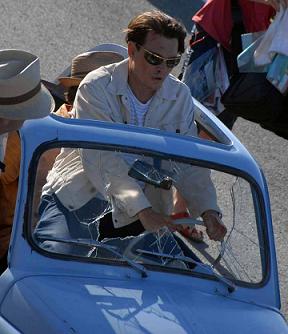