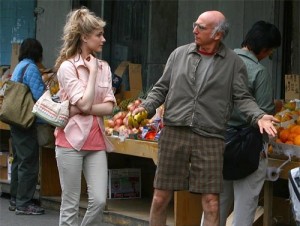 Woody Allen’s latest, ‘Whatever Works’ is a fairly entertaining film suffering from the same flaw as most of Allen’s comedy’s from the last few years, it just doesn’t hold a candle to his past work. Not that it matters, if its by Woody Allen, I’m going to go see it, and chances are, I’m probably going to like it.

‘Whatever Works’ stars another comedic favorite of mine, Larry David in the “Woody Allen” role. Boris Yellnikoff (David), a former physicist that now teaches Chess to children has grown increasingly bitter about life, and for the most part has cut off most contact to the outside world. He isolates himself in his home, goes out occasionally to hang out with a few of his friends. One day, on his way back home, he runs into Melodie (Evan Rachel Wood) a runaway from Mississippi. She asks for Boris’ help until she can get her feet on the ground. For whatever reason, Boris lets her into his life.

The two become friends, and Boris begins to influence his ideologies onto the impressionable young girl. He realizes he has fallen in love, and the next thing you know, their married. Things begin to get complicated as Melodies Mother (Patricia Clarkson) finds her after searching for a year.

The film is well shot, and there is a decent chemistry between David and Wood (albeit a weird one given their age difference). But the back and forth between the two is mostly fun to watch. Wood has been showing some great range between this and her performance in last years ‘The Wrestler.’ David is mostly playing a version of himself from ‘Curb’ which in turn is a version of himself, and I have no qualms about that.

Another thing Allen’s last few comedies have had in common is the fact that their all decent premises that just don’t gel for some reason. Their all a great build up, and then they just start to buckle and never really go anywhere. But in the end, I’m entertained long enough leave the theater with a smile on my face.

I was really excited for ‘Whatever Works,’ mostly because I’m such a huge fan of both David and Allen. But, in the end, I got just a fairly entertaining movie, that I have no reason to ever see again. Should you see it? ‘Whatever Works’ is why they made Netflix.