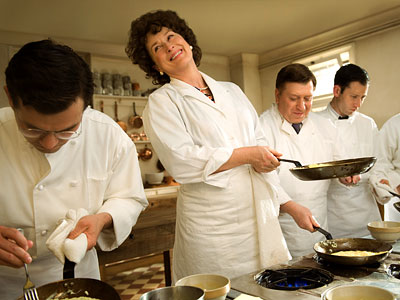 If food and meals truly bring people together, is it that big a leap to see food bridging the gap of time and distance to bring two people together?  In Nora Ephron’s “Julie & Julia,” the two brought together, (so to speak,) are Julie Powell and Julia Child.  And the thing that brings them together is beef and eggs and duck.

Julie Powell is a literature major, several years out of college, working at the Lower Manhattan Development Corporation following 9/11.  She works in a cubicle.  The people on the other end of the phone have terrible stories to tell her about loved ones they’ve lost, or they’re looking to blow off steam, to yell at someone about the most recent suggestion on how to replace the World Trade Center buildings.  All of Julie’s friends are successful, busy, and , one would presume, happy.  Julie is also an amateur cook.  Along with her husband, she comes up with the idea of starting a blog.  She will cook everything in Julia Child’s “Mastering the Art of French Cooking,” within one year.  She will write about her experiences as she goes.  Meanwhile, a continent away, Julia Child is having her own crisis.  Freshly arrived in Paris with her husband Paul, she longs for something to do while he is busy working as a diplomat.  She tries making hats, she tries bridge, but nothing seems to take.  Then she tries a cooking class.  And she’s off.  Along with two French friends, she starts writing a cook book, to tell Americans about the wonders contained in French cooking and to do it in a style and language that they can understand.

The movie is supposed to be a back and forth, with each story just as interesting, so that you never miss any of the characters.  Sadly, that doesn’t happen.  Julie pretty much cooks the whole time.  She bickers with her husband, who reminds her that there are other things in life than Julia Child, and he leaves but then comes back.  The interesting story is Julia and Paul.  So well-suited for each other, so clearly in love, it is a huge disruption when Ephron goes back to the present-day, and we have to worry about making a soufflé.

Amy Adams is passable, not really doing much of anything with this character.  The standout is Meryl Streep.  For the first few minutes that she’s on screen, it’s odd and almost looks like she’s doing an impersonation.  However, seconds later that disappears and she truly takes over the character.  It is a wonderful performance that makes you fall in love with both Child and Paul.  They seem wonderfully happy together.  Which is another reason that it’s a bummer to go back to Julie.  She’s unhappy.  She keeps telling everyone she’s unhappy.  It almost feels like a self-fulfilling prophesy.

The food is the other star and it all looks amazing.  Watching everything simmer and bubble is wonderful and you definitely work up an appetite watching the movie.  But my appetite wasn’t necessarily for food; but instead for knowing more about Julia Child.  As a character, she’s fascinating.

Where they really lost me was in the final seconds of the movie.  Both Julie and Julia have achieved some level of successes.  Both are happy.  We fade to black and then a text screen pops up, telling us what happened next.  The last line of text says something along the likes of, ‘and Julie’s book was made into a movie.’  Huh?  A couple of things: 1, having a movie made of your book is not necessarily a great thing and 2, it’s really strange for the people who made the movie of your book to be celebrating that they did so.  Well done, pats on the back for everyone.  Oh, you’ve already done that yourself?  Well nevermind then.

In the end, “Julie & Julia,” is half a fun movie.  Meryl Streep is wonderful.  However, she’s ultimately let down by the other story she had nothing to do with.  Amy Adams is a good actress, but she’s not great here, and she’s not helped at all by the material.

Julia Child preached not focusing on your mistakes and to keep on going, though it may be tough.  Sadly, the filmmakers missed the boat.  Sometimes you need to back up and make sure you’re doing things the right way.  While they tried for a gourmet meal, what they ended up with was a movie that gets the appetizers and the dessert right, but for the entree, serves you a dry, overdone hamburger.  -Sam