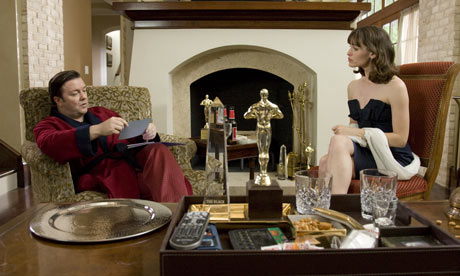 The central conceit in “The Invention of Lying,” is, well, what the title said.  The movie is set in an alternate world where everyone is completely honest and doesn’t know how to lie.  Gervais stars as a script writer, working for a company that, because no one can tell a lie, they also can’t make up a story, re-tells popular stories.  The movies consist of a reader sitting in a comfortable leather chair, looking into the camera and telling you what you already know.  Gervais is on the verge of being fired.  (Apparently, he can’t write a good script about the black plague… go figure.)  His mother is in a nursing home, slowly dying and the girl he went out on a blind date with, doesn’t really like him because he’s short, fat, has a pug nose, and doesn’t have a lot of money.

Facing eviction from his apartment, Gervais goes to the bank to withdraw what’s left of his money to rent a truck to keep all his stuff in.  However, their computers are down and they ask how much he wanted to take out because they’ll just give it to him.  (If no one lies, there’s no need for trust either.)  He says the exact amount that he owes his landlord and he’s off and running from there.

Gervais’ life makes a complete turn around and soon he finds people looking up to him for the answers because, well, if they can’t make them up on their own, they need someone.  He grows closer and closer to the girl he went out on that blind date with, who is falling for him, but knows deep down that their genetics might produce fat, ugly children.

I’ll stop the plot summary there because there is a world of though-provoking ideas and concepts that quickly follow and it’s best to go into “The Invention of Lying,” as unaware as you can be.

The cast is very, very good.  (One wonders how he got all these people.)  Along with Gervais, the movie stars Jennifer Garner, Louis C.K., Jonah Hill, Jeffrey Tambor and Rob Lowe, with cameos from Philip Seymour Hoffman, Ed Norton, Tina Fey, John Hodgman and Jason Bateman.  With such a large cast, certain people are going to be wasted, and their one or two scenes aren’t as good as you would hope them to be.  Of course that’s the case here, but it’s an acting ensemble, and everyone is working to tell the best story they can, and not to show off their individual talents.  (Shocking, but true.)

“The Invention of Lying,” is going to shock and surprise some people.  It’s going to force you to think and consider things that you probably didn’t think about before.  And that’s a good thing.  If the worst criticism that one can levy at a movie is, “it makes you think,” well, that movie’s doing something right.  It’s not the funniest thing I’ve ever seen, but it bops along at its own pace, and is continually entertaining and charming.  Maybe you won’t fall to the floor laughing, but at the end of the movie, you’ll be both smiling and thinking.  Not too bad a combination at all.  -Sam