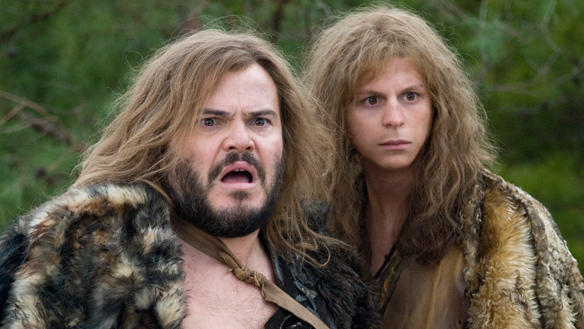 History is, according to the saying, written by the winners, but what if instead it was written by the losers?  Such is the premise of Harold Ramis’ latest comedy, “Year One.”

As the film opens, tribe members Zed and Oh, (played by Jack Black and Michael Cera, respectively,) are kicked out of their tribe.  They’ve been proved time and again to be terrible hunters and gatherers and, on top of everything else, they can’t even club a woman over the head and drag her back to their hut without a production.  So they’re cast adrift, heading off into the distance where Oh isn’t completely convinced that they aren’t going to fall off the edge of the world.

In their travels they meet Cain and Abel, (who seem to always be at each other’s throats,) and spend time as slaves, then Roman soldiers, then guests of Sodom and then, finally prisoners of Sodom.  While it may play fast-and-loose with the facts, this isn’t a movie you turn to for historical accuracy.

The cast is across the boards, excellent.  Black, who at times overpowers his characters to a point where you’re simply watching him run around and completely loose the story, is kept in check by Cera’s Oh, who is like almost every other Cera character- lost, confused, and wishing things were just more simple and that girls would like him.  David Cross appears as Cain, with Paul Rudd, of course, showing up albeit briefly as Able.  Araham’s son Issac, (played by “Superbad’s” Christopher Mintz-Plasse,) leads them to Sodom while Oliver Platt plays a disgusting consort to the king and Olivia Wilde plays the princess.

Director and co-writer Harold Ramis continues his fortune to be underappreciated as a craftsman, with the movie both presenting the comedy incredibly well, yet still with a sense of scope and a cinematic eye that is missing from many a comedy.

“Year One,” is, comedicaly speaking, exactly what you think it would be.  If you’re inclined or in the mood for silly, off-color and  pointless, this is a movie for you.  If you’re looking for something more intelligent, look elsewhere.  That is not this movie’s goal.

“Year One,” falls into the same category for me as movies like “Step Brothers,” and “Role Models.”  Movies that didn’t connect with audiences at theaters and are in a prime position to be picked up and re-discovered by people who are looking for a fun night, maybe without the hassle of parking, tickets and concession prices.  Or maybe it was given the short shrift coming from Judd Apatow’s production company.  Maybe this was the millstone that sunk the movie.  Either way, it’s a damn shame.

It’s not smart, but it certainly is fun.  “Year One,” might not be historically correct by a long shot, but it’s 90 minutes fly by quick enough you don’t really notice it.  Check it out.  -Sam