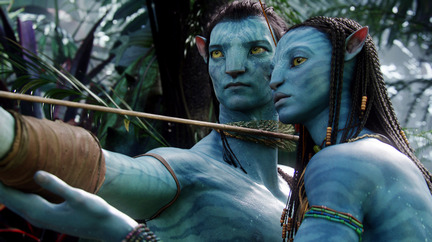 With the pre-release rumblings and talk before the release of James Cameron’s latest movie, it’s hard not to walk into “Avatar” without having some thoughts about what you are about to watch.

“Avatar,”is about Jake Sully, a former marine, who lost the use of his legs while in combat.  His twin brother has just died and Sully is asked to take his place on a mission to a distant planet. Pandora looks similar to earth in some ways, a jungle forest with incredibly tall trees and soaring waterfalls.  However, buried on Pandora is a rock that earthlings need to use for energy.  It’s worth so much, they’ll do anything to get at it.  And what they need to do to get it is to move the Na’vi people.  They’re six-feet tall, blue and live and worship the earth and the trees.  Humans have grown from DNA their own version of Na’vi, which, through a computer process, can be controlled by the mind.  Each version of Na’vi, or as they’re known, avatar, looks like the person controlling them.  So, with Jake’s brother dead, he is the only option to control his brother’s avatar.

As he interacts with the Na’vi, Jake begins to understand the people, and their belief system.  He starts to sympathize with them, and turn against the humans who sent him there to chase the Na’vi out.  He falls in love with a Na’vi woman, called Neytri.  And when the humans decide they can wait no longer to start stealing the rock that they want, Jake is forced to choose sides.

The script isn’t great, the acting is solid but not always outstanding, but in Cameron’s hands it all works.  You’re swept up in it and you go with what Cameron’s selling.  This is epic storytelling, much in the same way that “Titanic,” brought you along on the boat’s maiden voyage and “Terminator” brought you into the fight for the planet’s future.

James Cameron is a master at creating movies that envelop you and whisk you along on the ride.  “Avatar” is no different.  Basically a re-telling of the Pocahantas story, it’s a story that makes allusions to the US war versus Iraq as well as the debate over global warming and the treatment of our planet.  It’s simplistic, but it works in this context.  Cameron is not known for writing scripts filled with depth and that doesn’t change here.  He makes movies that play well to a room full of people.  “Avatar” plays very well to an audience.

The cast, led by Sam Worthington, Zoe Saldana, Sigourney Weaver, Michelle Rodriguez, Giovanni Ribisi and Stephen Lang are all perfectly cast.  All of the pre-release talk about whether Worthington can lead a movie of this size fizzes out as soon as you see him.  Lang stands out as a general determined to get what he wants off the planet by any means necessary.

With much of the talk about this being a new dawn for 3D movies, Cameron has delivered on what he promised: a new way of looking at cinema.  He never seems to show off the world he’s created and resists the urge for tracking or crane shots over Pandora.  Everything you see is in service of the story.  And while all the hype over 3D makes you wonder if it’s a case of the emperor’s new clothes, “Avatar” works well in this format, but it certainly doesn’t feel like a death knell for traditional filmmaking.

I hate to say “Avatar” is worth seeing just to form your own opinion and to have something to say at holiday parties and gatherings this holiday season.  But maybe you should.  While on paper, “Avatar” might not seem to be the type of movie that you’d like, there’s enough of a universal story here for anyone to get into the movie.  “Avatar” is that rare movie, something that lives up to it’s hype.  -Sam