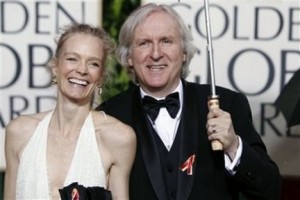 So, ‘Avatar’ takes Best Director and Best Picture at the Golden Globes and the world splits into half.

Last night’s Golden Globes presentation was an excellent show, with host Ricky Gervais lampooning everything from Mel Gibon’s alcoholism, to the drama in the world of Late Night NBC. Overall though, I think it was a great night, with the only thing sorta striking me as surprising being Avatar taking Best Picture and Best Director!

Not that I didn’t think it was a possibility. I do think out of all the films nominated, ‘Avatar’ will be the most timeless given its technical achievements, but I was pretty sure Hurt Locker (coincidentally directed by James Cameron’s Ex-wife Kathryn Bigelow) would win in the best picture category. That said, I’m happy ‘Avatar’ won, I think it echoes exactly what Martin Scorsese said last night regarding Cecil B. Demille. ‘Avatar’ much like DeMille’s films, was a spectacle, and an achievement in the new direction that film is heading in. So, therefore, Cameron earned his prize, and I’m glad he did

The most deserved award of the night went to Christoph Waltz, whose performance in Inglourious Basterds made the movie. Hope the Academy follows suit with this one.

‘The Hangover,’ though extremely fun and entertaining, winning over (500) Days of Summer was a little strange for me, though, I don’t really think of 500 Days as a comedy, but, the Golden Globes are funny that way.

I love that the Golden Globes also focus on Television, and it was great to see ‘Dexter’ getting a lot of recognition, as well as Glee.

In summary, I think it was a fun entertaining telecast, and I think the results of the night should make for an interesting Oscar night.