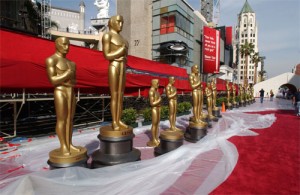 So the awards season has officially come to a close, and ‘The Hurt Locker’ comes out on top with six awards in total, including Best Picture and Best Director. Honestly, the results were no surprise, we’ve heard nothing but Hurt Locker buzz for the past few weeks. Though my personal opinion holds that I feel that 20 years from now, it’ll be Avatar we’re talking about and not Hurt Locker, it is always great to see a smaller film take home the gold.

I was a bit surprised to see Sandra Bullock take home Best Actress, other then that though, there wasn’t anything else that truly shocked me, overall the ceremony was fairly predictable. I was a bit disappointed that ‘White Ribbon’ didn’t take home Foreign Film or Cinematography, but I was happy with who won. Overall, a great but fairly predictable telecast. Now, lets cross our fingers for Shutter Island and next years awards!

Actress in a Leading Role: Sandra Bullock, The Blind Side