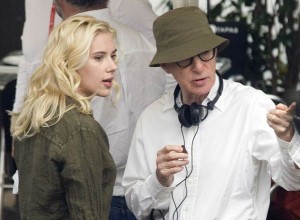 Variety.com is reporting some news on Woody Allen’s next film that starts shooting this summer.

Marion Cotillard and Rachel McAdams are in final negotiations to star in Allen’s next project that will lense in Paris. The rest of the cast includes Owen Wilson, as well as a possible cameo by Carla Bruni-Sarkozy, France’s first lady.

The film is apparently half period have contemporary film that was originally going to be shot in 2006, but abandoned due to cost.

Allen’s next film ‘You Will Meet a Tall, Dark Stranger,’ which stars Anthony Hopkins, Josh Brolin, Naomi Watts, and Antonio Banderas releases later this year, and will possibly play at Cannes. That film, along with this upcoming untitled film, and’ Vicky, Cristina Barcelona,’ are all part of a financing deal with Spain-based Gravier Productions.