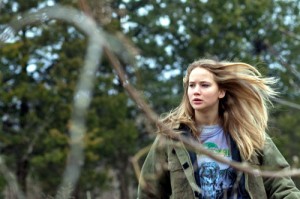 Winter’s Bone is a chilling (no pun intended) adaptation of Daniel Woodrell’s novel. Described as country noir, the film was masterfully adapted by director and co-writer Debra Granki, and stars Jennifer Lawrence and John Hawkes.

The film opens in a cold setting, on a small house in the Ozarks. Ree (Jennifer Lawrence), a young 17-year old woman is tasked with caring for her younger brother and sister, as well as her own Mother, who is sick, and incapable of caring for the family.

The sheriff shows up at Ree’s door to let her know that if she knows where her meth-cooking father is, she better make sure he shows up to his court date. He put their land and home up for bond so he could be let out. If he doesn’t show up, they will lose their home.

Ree sets out asking everyone she knows where her father is. But the mystery becomes deeper, because the more questions Ree asks, the more she finds out how people are unwilling to help her find her father, and what is worse, the people who can help, won’t, and refuse to tell her why.

The film is cold (literally), every scene outside, and even in Ree’s home, feels extremely cold. There is a great scene when the family wakes up, and the children are bundled under neath blankets. You can just feel the chill in the air. Everything about ‘Winter’s Bone,’ felt extremely natural, and truly genuine. ‘Winter’s Bone,’ was shot entirely on RED, and the cinematography only aided the cold setting, painting the world with overcast light, in blue hues.

Following the IFFBoston 2010 screening, Granki told the audience the lengths they went to make the film as accurate in its locations and actors as possible. Most of the supporting cast were locals, Ree’s sister was from the area where they filmed, and the exterior of her home in the film was actually her home. The clothes everyone wore were actual clothes of the residents of the city. She told us this great story about how they did a swap, where the townspeople actually traded their frayed-used jackets for brand new ones, so the wardrobe department would have real, worn in wardrobe.

Jennifer Lawrence was absolutely stunning, this young actress is our main focus throughout the film, and she portrays a young woman pushed to become the replacement matriarch of this family in a very difficult life position. John Hawkes, who plays Teardrop, Ree’s uncle, the brother of her missing Father, is also great. He brings to life a man whose life has been affected by the use of meth and other drugs, and he plays it with such realism, that when we saw him on stage for the Q&A, it was hard to believe it was the same individual.

Granki also detailed to the audience the process of getting permission from the community as an outsider, to tell a story dealing with the subjects that this film deals with. They made sure everyone knew what it covered, and they still welcomed them into the community, and they were able to make this film in the world where it takes place.

‘Winter’s Bone,’ is definitely a brooding heavy film, but it presents a world drawn from real life. It paints a beautiful picture that there is hope even in a community that is surrounded by the broken sad world of meth.