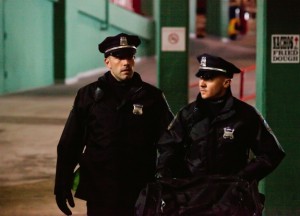 The Boston crime movie has become a genre of its own, the past few years have seen ‘Mystic River,’ ‘The Departed,’ and Affleck’s own ‘Gone Baby Gone.’ ‘The Town,’ is another excellent addition to the genre, and shows Affleck becoming increasingly more comfortable in the directors chair.

Sam Fuller once said that a movie has to “grab you from the balls” right in the beginning, that is exactly how this movie starts. The opening heist sets the tone for the rest of the movie. It’s fast, violent, and extremely planned out. Doug MacRay (Ben Affleck) is the leader of the group, which is made up by his childhood friends. His closest friend is James “Jem” Coughlin (Jeremy Renner) a frightening individual that reminds me of Joe Pesci’s characters in Goodfellas and Casino. Emotional, short fuse, and extremely violent.

During this first heist, Jem takes the bank manager Claire (Rebecca Hall) hostage, letting her go once they have shaken their tail. Claire, is interviewed by FBI agent Frawley (Jon Hamm), and returns home, clearly disturbed by her experience. To ensure their security, Jem had taken Claire’s license during the robbery, only to find out like them, she also lives in Charlestown. Jem thinks it’d be agood idea to pay her a visit to scare her enough to not do anything. Doug, clearly not trusting his friends judgment, takes the task away from him.

Now things get complicated, after a conversation at a laundermat while Doug is following Claire. The two start spending time together, Doug clearly feeling something for her. However, the situation is complicated, because though he cares for her, he’s the reason she’s in such an emotional state.

‘The Town,’ has some excellent heist and escape scenes, and some great shot and edited shoot outs. The tension in the dialogue, and the fear of Claire finding out who Doug really is puts you at the edge of your seat. Jeremy Renner is excellent, and Blake Lively transforms to a character so far from her previous roles, its hard to picture her as anyone else. ‘The Town’s’ script is really tight and well written, having not read the source material I’m not sure how closely they stuck to it. However, in an interview with NPR, Chuck Hogan, author of ‘Prince of Thieves,’ says he’s very happy with the adaptation.

Also, for a Boston film, the locations seem fresh, and they picked some iconic locales in the city, especially the films finale. Affleck certainly went out of his way to use Fenway Park in a completely different way then anyone else ever has. The films final shootout has the potential to be one of those iconic heist thriller scenes you’ll see in an awards show montage some day.

The film had a few parts that bothered me, specifically the way it concludes (but I won’t get into it here). But other then that, ‘The Town,’ is Boston Crime films at its best, and should not be missed. I can’t wait to see Affleck’s next film, and I’m definitely curious to see how it does come Oscar season.