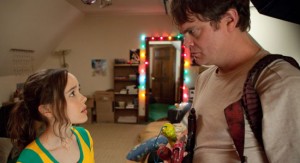 James Gunn’s ‘Super’ starring Rainn Wilson and Ellen Paige is doomed to be compared to last years ‘Kick-Ass,’ and it is my job as the journalist to state before I even begin my review, ‘Super,’ is most definitely not ‘Kick-Ass.’ Gunn has assembled an entertaining, darkly funny film with a great cast of actors.

Frank (Rainn Wilson) has lived a sad, lonely life, in the films melancholy opening, we learn that there are only two perfect moments in his life. The day he got married to the love of his life Sarah (Liv Tyler), and the day he helped a cop find a perp. We join the story as Sarah and Frank have grown apart, and Sarah leaves him to go back to a life of drugs and alcohol, as she starts dating a shady (but somehow nice seeming) character named Jacques (Kevin Bacon).

Frank is watching television, and he finds himself inspired by a Christian Super Hero called The Holy Avenger (Nathan Fillion). Called to by God to start bringing Evil to Justice, and hopefully saving Sarah from the evil influences of drugs and alcohol. Frank starts researching to create his own superhero. He goes to the obvious place one would research such a thing, the local comic book store, where he connects with Libby (Ellen Paige). His creation, the Crimson Bolt, lacking super powers, he takes up a heavy wrench, and starts telling crime to “Shut up,” usually by violently splitting their heads open with the wrench. 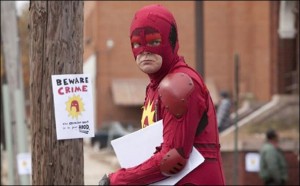 ‘Super’ is extremely violent. Gunn doesn’t hold back on some of the brutal violence the Crimson Bolt commits. Of course, its all done with an air of comedy, but it doesn’t change the fact that there are definitely some intense scenes in the film. Frank is essentially Travis Bickle in a mask, where, he believes what he is doing is for the greater good.

The only similarity the film has with ‘Kick-Ass,’ is that they are both films about superheros that are ordinary people. That is where the comparison ends. This film is about a sociopath who is trying to save the woman he loves. Rainn Wilson is excellent as Frank. Unfortunately, he is going to be compared to his television character for quite a long time, but he does a great job embodying the character. It would have been very easy for an actor to take the character over the top, but there is a degree of believability at play, owed most likely to Gunn’s and Wilson’s excellent collaboration. At the Q&A with James Gunn following the screening, he points out that it took him a long time to find an actor to play Frank, which was one of the main reasons the film lay unproduced. But once he met with Rainn Wilson, he knew he’d found his lead.

Ellen Paige also plays a great sidekick, often times Paige is given roles with dialogue that irritates the hell out of me (READ: Juno, Inception), but she was perfect 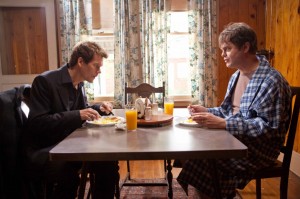 here. Kevin Bacon’s villain I found a bit non-traditional, he was definitely not a good guy, but he wasn’t particularly evil until much later.

What I enjoyed most about ‘Super,’ was James Gunn’s interest in really messing with his audience. The film takes some significant risks of losing the audiences. Things occur to characters that you wouldn’t ordinarily see in other films, and I commend the film for this.

The music was great, and the film was shot well. Despite being an independent, I didn’t feel like the effects felt low budget whatsoever – oftentimes this is the weakest point in films like this – and there were some interesting visual effects (I’ll hold back the spoilers).

All in all, ‘Super’ is certainly not a film for everyone, it is violent, dark, and darkly funny. But the recognizable cast will hopefully fill the seats, and those folks that this film is for, will definitely be in for a treat.

We have a video of the Q&A from Monday’s Screening at the Brattle Theater in Boston that we will be posting later this week, so check back, or follow us on Twitter or Facebook for the update!