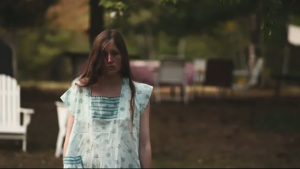 When I sat down for ‘Green,’ I didn’t expect that I’d be watching a horror film. Green is not horror in the literal way, much of what occurs is internal, but writer/director Sophia Takal takes us there through great editorial and visual decisions.

Genevieve (Kate Lyn Sheil) leaves her (suggested as pretentious) Brooklyn community so that her boyfriend Sebastian (Lawrence Michael Levine) can write for a blog exploring what its like to farm and live in the rural south. They quickly meet Robin (Takal), a local who befriends with the pair. Clearly not as “intellectually” rounded as Sebastian, she stills connects with Genevieve as a change from the people she’s used to back in Brooklyn.

Genevieve, soft spoken and internal, seems to come out of her shell when she’s around Robin, and the two become fast friends. Sebastian at first approaches Robin’s Southern naivety as novel, but also grows to like her. This is where Genevieve’s jealousy sets in.

We are witness to her internal jealousy during Genevieve’s walks through the woods. There are quick flashes of Robin and Sebastian together – and Genevieve becomes colder towards Sebastian and even more so towards Robin.

The film was shot on the Canon 5D Mark II, quickly becoming a favorite among independent filmmakers. The cameras wide choice of great lenses gives this film its look. Close, low-depth of field, lots and lots of bokeh. As Genevieve falls further down the path of jealousy, the short interludes of scenery become more and more out of focus, symbolizing her spiral downwards.

The acting here is quite natural, a nod to the collaboration of the cast. Takal explained during the Q & A that the first part of the film was written, and the rest came out of improvisation that was written and reshot. The film was inspired by Takal examining her own jealous feelings of the friendship between her roommate and her fiancée, who happen to be Levine and Sheil.

‘Green’ is a film about the horrors of jealousy, made with great tone and feeling. The actors embody the characters with such realism, you almost feel like you are watching a documentary.