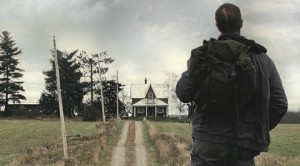 There have been many films in the past few years dealing with the reality’s of war, the recent film ‘Brothers’ come to mind. Howver, none have captured the idea of the “lost” soldier as well as writer/director Ryan Redford’s ‘Oliver Sherman.’

‘Oliver Sherman,’ doesn’t delve into any sort of detail of exactly what war the characters are veterans of. This information is secondary, all we need to know is, Sherman Oliver (Garret Dillahunt) was saved by Franklin Page (Donal Logue) during their time during the war. Sherman shows up at Franklin’s doorstep, 10 years after the war to reconnect, and start to get some semblance of a life back.

Franklin, has seemingly moved on from the horrors at war, and is married with two children. He owns his own home, and maintains a steady job. Sherman, has not been so lucky, having spent a bulk of his time recovering from his almost fatal wounds. We learn that Franklin saved Sherman while the rest of the people in the company wanted to leave him behind. Franklin and Sherman were never friends, but it is this experience that has brought the pair together.

As time goes on, strange things about Sherman’s personality start to come out. He’s got violent tendencies, a questionable sense of right and wrong, and his jealousy starts to come out. He can’t understand how Franklin was able to so easily move on, and Sherman is still stuck in the past, forever living in the shadows of the war.

Things intensify, as the jealousy and resentment evolve to a serious threat of violence. The film builds a great deal of tension between the characters, pushing you to the edge of your seat, because you know what Sherman is capable of, but you don’t know how far he will go.

Dillahunt embodies the character of Sherman so well. Sherman is cold, calculated, but you still feel bad for him because of what he’s gone through. At times his actions (a few accidental) make you wince, because you want him to get better and move on.

Oliver Sherman is Canadian writer/director Ryan Redford’s first feature, and it certainly shows great skill in his ability to craft a great story and direct great performances. ‘Oliver Sherman,’ is a sad, emotional movie that takes an interesting look at a very thing many soldiers are dealing with as they return home today. The filmmakers and actors took care to show a lot of respect to the subject, while creating a chilling tragedy.