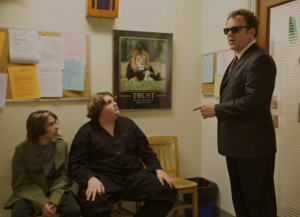 Directed by Azazel Jacobs, ‘Terri’ is the story of its titular character, played by Jacob Wysocki. 15 years old, overweight, dressed in pajamas, Terri feels like an outsider at his high school. Floating on through.

He lives with his Uncle James (The Office’s Breed Bratton), who is definitely suffering from an affliction that is never explained, his main caretaker being his nephew Terri.

Terri is taken under the wing of Mr. Fitzgerald (John C. Reilly), the principal, who schedules a weekly “check-in” with Terri, a service he has for students he feel need more guidance than the rest. Terri quickly sees that other “special” kids, a troubled youth named Chad, have more glaring issues than himself, and he is upset to be considered among these kids.

An incident which I won’t spoil here pushes the otherwise “cool pretty girl” Heather to becoming friends with Terri. And we watch a crush/friendship blossom between this unlikely pair.

The film has a fairly sad tone, and contains great moments as we follow Terri in his day to day life. Whether its the curious situations Terri finds himself in, or the funny back and forths with the principal, Terri is a great character that is wonderfully embodied by Wysocki.

The film moves us through the story fairly quickly, and ends a bit abruptly before we have an opportunity to process that the characters have undergone a change. I definitely was left wanting a little more closure.

The film does a great job putting you back in the awkward world of high school. Everything about it reminded me of the strange and sometimes sad situations you find yourself in during this time in life, and all the characters portrayed in the film felt real.

‘Terri,’ is great indie cinema, a well photographed, melancholly film, filled with some worthwhile performances from its mostly young cast.