When the trailer for “21 Jump Street” first came out, my initial reaction was an extremely loud groan. To describe the last few buddy-cop comedies that have come out in the past few years as underwhelming would be too forgiving (‘Cop Out,’ and ‘The Other Guys,’ come to mind). So here we are, a few years later, and 80s staple ’21 Jump Street’ is being rehashed as an action-comedy vehicle with Jonah Hill and Channing Tatum. The fortunate thing here is, the filmmakers realize that most people are going to into this film with that in mind, and act accordingly.

Directed by Phil Lord and Chris Miller, with a story written by Jonah Hill and Michael Bacall, the film introduces us to our main characters, Greg Jenko (Channing Tatum) and Morton Schmidt (Jonah Hill) while the pair are in high school. Jenko being the popular, letterman jacket wearing prom king, and Schmidt as the dorky, awkward, braced over-achiever that has no luck with the girls.

The two graduate high school, and now, 7 years later, are reunited at the Police Academy. Jenko, the brawn of the pair, excels at the physical aspects of the job, while Schmidt, excels at the brains. The two help each other through the academy, and eventually are partnered up.

After a botched “first arrest,” they are reassigned by the Captain to a super secret part of the force, 21 Jump Street, where their new captain, Captain Dickson (Ice Cube) introduces them to their new task. There is a super potent new drug spreading across a high school, and its their job to find the supplier, and put a stop to it before it spreads. 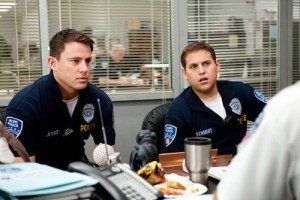 Within the first 10 minutes, the film references the fact that “21 Jump Street” as a division of the police department that is being restarted, because “the people in charge are uncreative and can’t come up with any new ideas, so they recycle the old ideas over and over again.” Clearly a knock at itself, ’21 Jump Street,’ is so excellently self-aware right from the get-go, that its smooth sailing from there.

The film mocks and parodys high school and action movie archetypes with hilarity, creating some sort of cross between Superbad and a goofier “Bad Boys.” The film is crude and vulgar, and there are certain scenes that actually made my stomach turn (I won’t ruin them here), but its all in good fun.

Tatum and Hill have great chemistry, and polar opposite to the complete lack of chemistry between Will Ferrell and Mark Wahlberg in ‘The Other Guys.’ Neither Hill or Tatum play the characters completely straight, but regardless, both find themselves in a situation their not used to, which makes for some great comedy.

I obviously really enjoyed ’21 Jump Street,’ but I can’t imagine its for everyone. If you’re looking for something light-hearted and a lot of fun, I’d take a chance with ’21 Jump Street.’