‘Broken City’ marks Allen Hughes first solo film – the Hughes Brothers last joint effort being ‘The Book of Eli.’ The film stars Mark Wahlberg and Russell Crowe, and was on the Hollywood black list since 2008. The script, written by Brian Tucker, found a home with Hughes.

Billy Taggart (Mark Wahlberg) an NYPD Officer is on trial for the murder a man that was acquitted of rape charges. Mayor Hostetler (Russell Crowe) meets with Police Chief Carl Fairbanks (Jeffrey Wright), to discuss his thoughts on the matter. The Mayor believes Billy is a hero for how things went, regardless of whether or not Taggart shot in self defense – there is one less rapist on the streets. Fairbanks reveals that he has more evidence that could change the course of the case, but is asked by the Mayor to put a lid on it.

The movie then jumps ahead 7 years, where Billy is now working as a Private Investigator, and the Mayor, is running for reelection. The 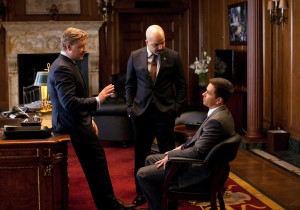 Mayor invites Billy to his office, and tells him that he believes his wife (Catherine Zeta-Jones) is cheating on him, and he’d like to hire Billy for 50,000 dollar to investigate, and to photograph her in the act – with the election a week away, he feels that it’d be good for him to have something just in case his opponents camp releases anything in the few days before election.

Obviously, something more sinister is at work, as Billy starts unwinding a plot that reveals that everyone has ulterior motives.

The film is a competent thriller done by the numbers. With great actors like Russell Crowe and Jeffrey Wright, Broken City is able to stand just slightly ahead of the pack. Wahlberg, who tends to be a hit or miss, definitely does a lot with the little he is given.

The story’s weakest arc is Billy’s girlfriend: there may have been something more in depth with this relationship in an earlier draft of the script or a different cut of the movie, but what was left and the direction it takes is completely unnecessary, and it stands out. There is a little bit of humor injected sparsely throughout the film, but it didn’t balance well with the overall direction of the tone of the script. There were a few decent twists and turns, but, at the end, everything was fairly predictable.

I’ve been a fan of the Hughes Brothers work, and while Broken City may not be completely Broken, it may take some time before Allen Hughes is able to balance himself without his close collaborator. Broken City shows that he’s able to create an entertaining film, but I’ve come to expect a certain level that makes the previous Hughes Brothers stand out that this average film is clearly missing.