Arnold Schwarzenegger is back this January in “The Last Stand.” While having appeared in both “Expendables” films, he hasn’t been a lead character since 2003’s “Terminator 3.” Director Kim Ji-Woon’s film, “The Good, The Bad, The Weird,” had a decent run in the American Festival circuit, and “The Last Stand” marks the director’s jump to American cinema.

“The Last Stand” opens with Sheriff Ray Owens (Schwarzenegger), an older lawman living out the rest of his days in the quiet Arizona border town of Sommerton Junction, where he relocated to continue to work as an officer of the law, but without the constant adventure/danger that was LAPD Narcotics.

Miles away in Las Vegas, Agent John Bannister (Forest Whitaker) is transporting a high-profile prisoner and member of the Mexican drug cartel, Gabriel Cortez (Eduardo Noriega). In the middle of his transfer, Cortez escapes quite spectacularly, hopping into a stolen Corvette ZR1 and tearing off toward the US-Mexican border at 200 miles per hour. 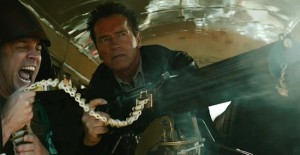 Back in Sommerton Junction, Owens and his deputies stumble on a gang of shady characters operating just outside the town. When Agent Bannister contacts him, Owens makes the connection that the suspicious newcomers who have taken up in his town are there to aid Cortez in crossing the Mexican border.

What transpires is an excellent display of action, gratuitous violence, and plenty of explosions.

The tone of “Last Stand,” despite some of its excess violence, is quite funny–it’s chock-full of the one-liners you expect from Schwarzenegger. Schwarzenegger receives excellent support from Luis Guzmán and Johnny Knoxville, who round out his rag-tag group of defenders.

The pacing of “The Last Stand” was a little rough in the second act: there are a handful of unnecessary scenes midway through that stop to build some of the character motivations. They felt thrown in to extend running time, but the second half of the movie makes up for it. Regarding the action, like most Arnold films, there has to be a complete suspension of disbelief; the fact that the Corvette can drive at an average speed of 120-150mph and not have to stop for a fill up, and it can take out an armored convoy and drive off with just a few scratches, adds to the overall comedic tone of the film.

Is “The Last Stand” great cinema? No, but you knew that from the description. Is it entertaining as hell? Absolutely. Arnold has returned, and it’s awesome.