Did you know Joss Whedon loves Shakespeare? I certainly didn’t, so when I first heard about his adaptation of one of Shakespeare’s most popular comedies, “Much Ado About Nothing,” I really wondered what it would be like. I was pleasantly surprised. Using the original Shakespearian language, Whedon sets the story in modern day, and the entire project was filmed in and around his own home in Los Angeles.

“Much Ado” tells the story of lovers Benedick (Alexis Denisof) and Beatrice (Amy Acker), and Claudio (Franz Kranz) and Hero (Whedon newcomer Jillian Morgese). The film opens with Leonato (Clark Gregg) receiving word that Don Pedro (Reed Diamond) and his officers have returned from battle and will be staying in Messina for a month. We are introduced immediately to the “merry war” between Benedick and Beatrice, as well as Hero catching Claudio’s eye. So begins the familiar story of wit, love, and hijinks. 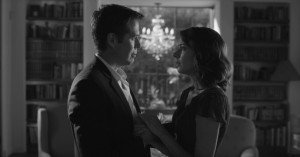 It’s great to see Whedon bringing films like this to the screen as he has one of the most loyal audiences in the history of cinema. The film features so many great Whedon regulars, including Nathan Fillion who plays is hilarious as Dogberry. An adaptation like this will hopefully introduce Shakespeare to kids who might otherwise not be interested. The modern setting makes the story more relatable, and the staging, sight gags, and physical comedy highlight the witty dialogue that may be a higher barrier of entry to some audiences. 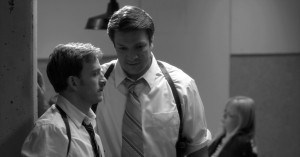 The film was shot over a period of 11 days and is in black and white, though the lighting suggests the filmmakers originally intended the film to be in color. But, with a grueling schedule and the nature of the almost “overnight” way that it was made, it was probably much easier to make the film black and white simply to aid in the continuity of production design.

I applaud Whedon for making this film – the actors clearly understood the text, and, while it may not have been the most perfect looking Whedon film, it was a funny, refreshing take on a popular story. “Much Ado About Nothing” should be in limited release in June 2013.

One thought on “IFFBoston ’13 Review: Much Ado About Nothing”