Skip to content
home Front Page, IFFBoston, Movies, Reviews IFFBoston ’13 Review: This is Martin Bonner
“This is Martin Bonner” is the second feature from writer/director Chad Hartigan. The film stars Paul Eenhorn as the titular character, and is a steadily paced character-study shot slowly and beautifully.
Martin Bonner (Eenhorn) has just taken a job in Reno, Nevada, helping released prisoners transition back into society. The film opens as Martin introduces himself to an inmate and pitches the rehabilitation process of the organization he works with. While the goal of the organization is not prothelytical, it is based in Christianity (Calvinism specifically), and the inmate calls Martin on it. 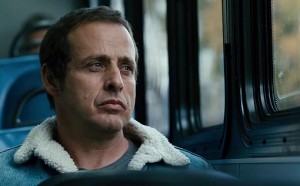 We meet Travis (Richmond Arquette) when he first released from prision; Martin picks him up and takes him out to lunch, and they slowly start to connect. Travis is quietly overwhelmed by the world he finds around him. His hotel at the crux of the different environments in Reno: loud roads, casinos, and processing plants.
Martin has two children: a daughter he talkes to every few days, and an artist son who never answers when Martin calls. Martin’s daughter signs her father up for speed dating, and Martin starts refereeing soccer games.
The film builds slowly and takes its time introducing the characters. The more intense Travis’s difficulties with reintegration become, the more he turns to Martin, with whom he feels he’s formed a strong connection with. Eenhorn plays the character with kindness, but underneath is a man quietly looking to find his place in the world. The character of Travis is also trying to find his place, and Arquette conveys the character’s sense of being overwhelmed by his reintroduction into society, and you can see his internal struggle in his eyes.
“This is Martin Bonner” feels like a true-to-life conflict and the characters are extremely well-rounded by their direction and performance, which speaks to the talent of director Chad Hartigan.