Steven Soderbergh has found this odd place in Hollywood where he is able to make the films that he wants to make.  He experiments with the super independent with films like “Bubble”, but then will show that he has mainstream appeal with the “Ocean” films.  This is the guy that made an epic chronicling the life of Che Guevara and then made male strippers into a blockbuster hit.  So it should come as no surprise that he has chosen to tell the dramatic and complicated life of Liberace with “Behind the Candelabra”, because of course he did.

Scott Thorson (Matt Damon) is an animal trainer on film productions in Los Angeles.  After meeting Bob Black (Scott Bakula) at a bar, the two head out to Las Vegas to see a show put on by one of Bob’s friends, Liberace (Michael Douglas).  After being blown away by Liberace’s performance, Scott goes backstage to meet the man.  Bonding over their shared love of animals, they become friends.  Liberace eventually invites Scott to live with him leading to a growing relationship that pulls Scott further and further into Liberace’s world. 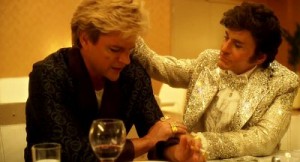 I had my concerns on how the distinctly Soderbergh-ian lens would capture all of the glitz of Liberace.  Apparently my mind had decided to dump any recollection of “Ocean’s Eleven” and “Ocean’s Thirteen”.  This guy has already showed us that his methods can yield great results when he decides to look at the bright lights of Vegas.  Soderbergh’s camera choices are some of the most interesting and different in the field today.  He does not make any changes to his ways of shooting for this film.  This looks exactly like a Steven Soderbergh film.  His reliance on natural light manages to squeeze every ounce of shine out of the massive supply of rhinestones.  More impressively, the portions of the film that take place within the tacky temple that is Liberace’s home have a dull sparkle that exemplifies its owner.  The gold and multitude of candelabras feel dusty and unkempt in their beauty, appearing as a museum to old Vegas kitsch. 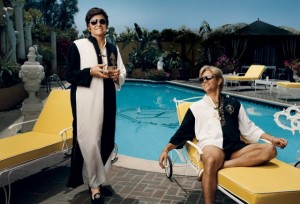 Liberace was a larger than life character, not just person, but character.  His flamboyant ways, viewed through our millennial eyes are a parade of gay stereotypes.  Michael Douglas is careful not to revel in this to heavily.  He communicates a flawed person.  He finds a balance between vain control freak and insecure romantic.  The man possesses power, and truly can surround himself with whomever he so pleases, but most of the time this is merely implied rather than directly stated.  However, Douglas is able to do something that I did not think would be possible, and that is to have Liberace strike fear in me.  There is one line in particular that is delivered with such malice that I challenge anyone not to get chills.  Damon is no slouch, holding his own with Douglas’s command performance.  Truly, there isn’t a weak link when it comes to the acting in this film.  In fact, Rob Lowe is unforgettable.  I don’t want to spoil the joy that is to be had by seeing him or experiencing his screen time, but his performance as Liberace’s plastic surgeon is necessarily creepy and surprisingly comedic.

The relationship between Thorson and Liberace is oddly classic.  They squabble and are manipulative of one another.  The intent of the relationship is often left vague, which comes into play later in the film, but they are closer to husband and wife than anything else.  It is fitting that at one point Douglas’s Liberace comments on their similarity to Lucy and Desi.  They are supremely dysfunctional.  Liberace’s push to define their relationship as possessing a paternal slant is odd, not because of the strange implications of having sex with one’s father figure, but more so because of the truth that seems apparent to everyone except himself.    Soderbergh has been quoted as saying that funding for the production was hard to come by due to the film being deemed “too gay” and that is too bad.  The American fear of homosexuality is unfortunate in this case because it is not presented as shock material but rather a part of the characters as people.  This is not an examination of a gay relationship it’s just a relationship between people that happen to be gay.  The homosexual nature only forces the proceedings to be communicated in whispers and filled with denials, adding complexity to an already convoluted love affair.

Biopics have previously felt a need to tell us the entire life story of their subjects.  While it can be interesting to see where a person comes from, occasionally more can be done by simply looking at how that person lived his life.  Steven Soderbergh turns his camera on the life of Liberace.  Soderbergh captures old Vegas glamour in a beautiful way that only he can.  Michael Douglas’s Liberace gives us just enough “old queen” without being over the top.  As much as this is a film about Liberace, it is a film about troubled love.  The relationship between Thorson and Liberace is admittedly hard to understand.  The troubles inherent to homosexual relationships in the late 70s/early 80s notwithstanding, the back and forth nature, off-putting father-son sexual implications and the insecurities of the men involved make for a deeply flawed situation.  “Behind the Candelabra” is a beautifully told story of love and hardship.  It will make you feel things you never thought a film about Liberace could.