I don’t know why I have to sell anyone on this. That might be a bad way to start a review, but I feel compelled to say it because of certain iso-metric priests/assholes that have been proclaiming that the comedic cesspool known as ‘Grown-Ups 2′ has been tracking higher than this monster/robot mash-up and that’s just plain unacceptable. Hell, maybe that was a ploy from ‘The Pacific Rim’ team to mobilize their Neon Gensis Evangelion base. It’s a decent strategy if it is. Regardless, it’s a movie you should definitely see this weekend. See it in 3D even if it is a post convert (Not natively shot in 3D for the laymen and women). There’s still a great 3D groove to it.

To the movie itself, it is a an awesome, oceanic wave of giant monsters trudging through city landscapes while their giant robot counter-parts unleash a fury of mechanized punches, chest cannons, and plasma bursting fists. Realizing that that last sentence tells you nothing more than the four trailers and countless ads you’ve probably already encountered, it doesn’t really 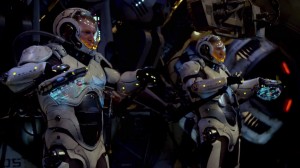 matter. What I mean is is that it shouldn’t really matter to you. You know, in your heart of hearts, that this form of a summer blockbuster was meant to “Wow” you in a base and simplistic way. It’s a beautiful thing when it’s embraced and done with a certain feathered touch of dignity and admiration for the barrage of monster movies before it and for countless other venues of monster story-telling like anime/manga, comic books, or pulp novels while still creating something new and overall exciting. ‘The Pacific Rim’ holds in it a vast universe that it enjoys sharing with you. Every bit of detail screams out another story-line that you can just go off and explore. The answer to why someone would go to see a movie in the theatres or in IMAX or 3D is this film. It’s the answer to the stay at home experience that is seemingly killing off the theatre going experience. Make it big and make it worthwhile and the rest will fall into place. 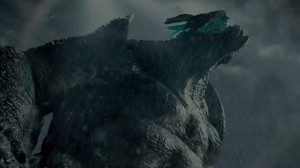 Sorry for a bit of the soap-box there, but it’s true. This is a great answer to a call that few people like myself want to admit to. People don’t go to the movies as much as they used to for numerous reasons. Chiefly, I believe it’s because of the easy access to getting it for free or at least seeing it as a video on demand or to catch it on Netflix, but sometimes you need to see a movie first on the big screen. You, the Jaeger, need to wrangle that movie/giant monster on the big screen, in it’s natural habitat, and then take it back to base to study as many times as you like. That last part only really works if you feel more at ease or at home with the human aspect of the story, but I know a couple monster sympathizers/furries so I guess I can’t be surprised if people want to go the other way with it. 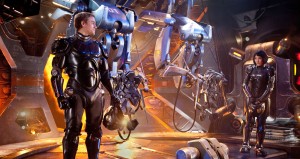 Now, not all movies may earn this right with you, but some pieces are bigger than life. They need to be watched on the big screen as they were intended to be because, to be honest, you won’t get the same feeling from it that you would in a theatre. Maybe it’s just me and I love watching it like I’m being surrounded, immersed in it, but that’s what the fucking medium is to me at it’s highest level. It’s getting thrown into a pit of darkness and coming out as something else in whatever way that projection directs you. ‘The Pacific Rim’ takes you on a fantastically fun journey with giant robots fighting giant monsters that look as real as if you were watching them in a real live aquarium.

That was one of the concerns I was going to have: will I be just watching and analyzing 1s and 0s for 2 hours? No. No, you’re looking at living breathing creatures that tear the screen apart. You’re watching a Guillermo Del Toro giant monster and robot movie. What else is there to say?

This article comes to LonelyReviewer via Phil, from the Sock Talk Blog and Podcast. Head on over to Sock Talk and check out their other content, and their great podcast!