Alfonso Cuarón is a director for your inner film nerd. His filmography is all over the place with exceptional quality across the board. Not only did he turn in the amazing and sexually charged Y Tu Mamá También, but made audiences weep with the timeless A Little Princess (seriously, so many tears). Not to mention throwing in a modern retelling of Great Expectations and the finest installment of the Harry Potter franchise, Harry Potter and the Prisoner of Azkaban, you know, when things really started to get dark. So it was with great frustration that we have been waiting since he hit his pinnacle of visual storytelling back in 2006 with Children of Men. This weekend he finally makes his return with Gravity, a film that could only come from Cuarón.

Dr. Ryan Stone (Sandra Bullock) is participating in her first space walk. Nervous and fighting the nausea inducing effects of zero gravity, she is doing her best to complete her additions to the Hubble telescope as quickly as possible. As she inches towards completion, she and the crew are alerted to incoming satellite debris. The bits of the broken satellite come careening across before any of the crew has time to avoid it and in the ensuing panic, Dr. Stone is knocked off structure. Tumbling through space, and with a dwindling oxygen supply, she faces her worst nightmare of being forever lost in the vast nothingness of space. 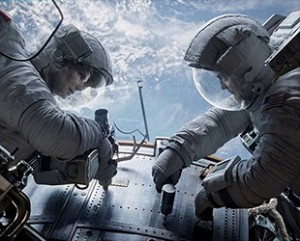 The film’s opening shot is a wonder in and of itself. The gargantuan Earth sits serenely below, and the silence that surrounds it is an invitation to simply wonder at its beauty. But like a plane flying on a cloudless background, there are no reference points to highlight the enormity of the environment. As if on cue, the satellite, beginning as a bright dot blending into the starry background, comes drifting into frame. The steadfast blue planet dwarfs it, and the audience begins to feel the true vastness of space. Without any words being spoken, Cuarón has already established the environment and fully engulfed us all within. The images appear like some wonderful piece of art, but simultaneously there is a lingering dread, and the treacherous environment that is walking in space is more than enough to inspire vertigo and a couple of queasy stomachs. When you hear Dr. Stone grappling with her own feelings of nausea, it is absolutely understood.

The unsure footing of space notwithstanding, the scenes are nearly serene and peaceful, an inherent beauty in its simplicity. We anxiously watch as the crew completes seemingly simple tasks, and Cuarón has so well established that this is truly space that even the smallest missteps make your heart nearly stop. This makes the sudden and complete destruction by the rocketing debris all the more disturbing. Cuarón recognizes the duality of space, how the wonder lives so readily with the unknown. The peaceable surroundings are so masterfully and quickly replaced by absolute chaos, all with only the sounds of Bullock’s panicked breathing. Although the tone of the film transitions seamlessly to thriller, the wondrous visuals are never sacrificed. Each moment feels ripe for over-direction, but Cuarón never succumbs to the temptation. Using the gentlest hand, the camera movement feels organic and only heightens the tension that is already overflowing from every scene. The symbolism is subtle, with the theme of rebirth effortlessly weaving throughout the proceedings, and only serves to elevate the film past any claims of unexceptionalism. 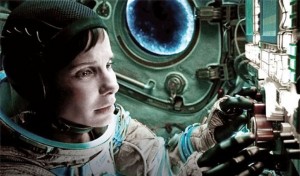 Each moment feels like the absolute collaboration between actor and director. Bullock acts as the gateway, a highly intelligent surrogate, embodying all of our greatest fears. The strength of her performance is how fully she carries the film all on her own without being overcome by the awe-inspiring ambiance. She cannot rely on grandiose speeches, instead communicating more with her breathing than is possible with any words. It’s all part of a whole of subtlety. 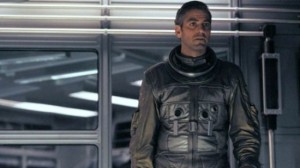 Where James Cameron jumps up and down for you to appreciate the amazing technical achievements of his filmmaking, Alfonso Cuarón sees them as little more than additional tools for storytelling. Just as he did in Children of Men, using modern technology to compose a captivating and upsetting long-shot, he has assembled a habitat that immediately and consistently feels authentic. Avatar is chockfull of fantastic images, but is in no way a fantastic film. Films exist as an art form for storytelling, so to be a success you must first succeed in this arena. If Gravity were to be only celebrated for its technical achievement, in the way the zero gravity always feels true, it would be a wonder to see but empty otherwise. Thankfully, Cuarón matches the expertise of the images captured with a nail-biting and fully engrossing story. Every moment is riveting and nearly dares you to take a breath. The experience is tense and stressful, as it absolutely should be. It leaves your stomachs in knots.

True filmmaking is complicated. Audio, visual and a certain unspoken element of artistic insight must be perfectly balanced to coalesce and produce truly fantastic film. Gravity is great filmmaking. Director Alfonso Cuarón has crafted a story that is continually captivating and grabs the audience by the throat and forces them to experience it all. The film always feels like a true meeting of filmmaker and actor, as Sandra Bullock’s performance is absolutely genuine and mesmerizing in the least showy of ways. Cuarón utilizes advancing technology as a tool in crafting an authentic world. The zero gravity feels true and necessary to the story and never like a director flexing his technical prowess. The absolute highlight of the film is the brilliantly assembled images. Scenes exist as works of art and becoming lost in the visuals is more than a possibility for the audience. Gravity is an example of the strength of the cinematic medium, a wondrous marriage of arresting visuals and enthralling storytelling that makes you anxious with tension while marveling at its beauty.