Reviewing film can be very complicated. Regardless of the amount of time that each review takes to write, (and trust me it is more than you think) most go without being fully read. Aggregators like Rotten Tomatoes boil the copious words into a number, and for many filmgoers that’s all they want to see. Of course this argument in and of itself is limiting, since it only refers to those that even bother to entertain us critics. Many ignore us completely, belittling the hours poured into watching and talking about films. They instead shout their independence, only concerned with the enjoyment the film will offer them. However, sometimes it just isn’t that easy. 12 Years a Slave is not a film that you will enjoy, but it is staggeringly fantastic. 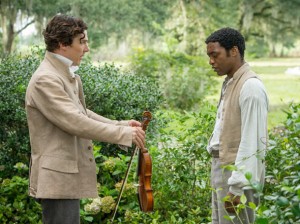 Solomon Northup (Chiwetel Ejiofor) is a freeman in Saratoga, NY. Despite the color of his skin, Solomon lives a happy life. He provides a comfortable life for his wife and two children and is well respected in his community. Solomon is introduced to Hamilton (Taran Killam) and Brown (Scoot McNairy), two men looking to add a musical element to their traveling circus. Seeing as his wife and children have ventured away for a three week work engagement, he takes the men’s offer. After more than satisfying Hamilton and Brown, the three have a celebratory dinner where much wine is consumed. The next morning Solomon awakes in chains. Robbed of his identity and life as a freeman, Solomon must now try to survive life as a southern slave.

If you were to listen to someone recount 12 Years a Slave, you would no doubt be told of unflinching violence and abhorrent racism, and certainly it is there. Nevertheless, the film is a great work of art for the space it leaves in between. Director Steve McQueen is proof that a true filmmaker must be an artist. His establishing shots are infused with such beauty, a juxtaposition to the atrocities being experienced by his

protagonist. His previous films, Hunger and Shame, have shown him to be a director of measured patience. Where previously his work has veered so closely to the artistic side as to seemingly question the very concept of modern theatrical film, 12 Years a Slave is much more conventional. The film has a clear three-act structure that makes it accessible to the less film-literate, but McQueen never sacrifices his vision. He is not afraid to let the camera linger on a scene, to let the silence hang over his actors, while being careful not to sacrifice the story’s forward momentum.

Mood and tone is of great importance to the film. No matter how dire the story, life is not all tragedy. There is a precarious balance to each scene. McQueen knows full well when to break the tension with levity, to allow the audience to recognize the humor of a situation within a swamp of sadness. Great care is taken 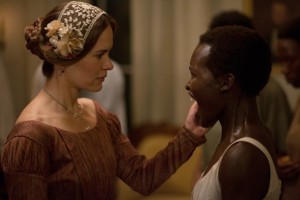 throughout the film and the small touches bolster the great acting flourishes that I will assuredly get to soon. Relying on a predominantly string-led score, no doubt a nod to the central character’s own affinity for the violin, master-composer Hans Zimmer more than makes his presence known. There is an inherent dread that accompanies Solomon’s boat trip to the South, but it is the score that makes it palpable. The strings boom with an aggression that borders on heavy metal, and something as simple as a paddle wheel becomes all the more violent. The spaces in-between the bursts of violence and emotion carry just as much weight because of how deftly the world has been constructed. 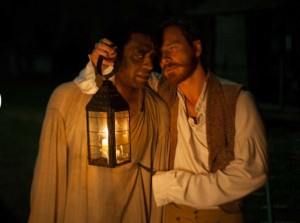 It is hard to adequately capture just how fantastic the cast is. Familiar actors pop up in the most minor of roles, but never fail to leave their mark. Chiwetel Ejiofor carries the film with a subtlety that often has you forgetting that he is the subject. He becomes Solomon and he tamps down his pain in hopes of survival, but Ejiofor never forgets that it the pain is there. Michael Fassbender, a McQueen regular, is given the opportunity for a more grandiose performance and often walks over Ejiofor. His character is the embodiment of despicability and Fassbender carries it with aplomb. Nevertheless, the strength of Ejiofor’s performance sneaks up on you, and the delicate nature with which he allows Solomon to feel happiness, makes for a fascinating study of quiet character development. Equally as impressive is newcomer Lupita Nyong’o as Patsey, who delivers a performance that will tear you up from the inside. 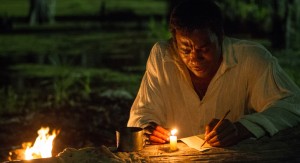 It feels odd to describe the experience of watching a film as grueling, especially when said film is about slavery, but that is one of the best descriptors for 12 Years a Slave. As the film cuts to black and the credits roll, there is a release that occurs, like the whole theater is just now being afforded the ability to breath. It is emotionally exhausting, because even at the best of times, the terrible is waiting just around the corner. But that’s how it should be. Steve McQueen has delivered a film that both amazes and upsets. Amongst a group of actors that baffles in its strength, Chiwetel Ejiofor stands out as a pillar of talent. With a performance that is complex and emotionally dense, he delivers authenticity in the smallest of moments. 12 Years a Slave is a conglomeration of skill in all aspects of its cinema. A film that makes you hurt in the least obvious of ways.