Most bad movies have some redeemable quality: sometimes it’s a single stand-out performance or character; sometimes it’s that the film embraces its own campiness. But occasionally a movie is so bad that all you can think about is everything they could have done to make it less terrible.

Directed by David Ayer, “Sabotage” tells the story of an elite team of DEA agents, led by John “Breacher” Wharton (Arnold Schwarzenegger), being hunted by a drug cartel. The film opens with the team taking down a cartel warehouse; the agents stash $10 million, blowing up the rest of the cash to hide the evidence. When they return to recover the stashed millions, it’s gone. The movie jumps forward 6 months: after an internal investigation at the DEA for agents skimming drug money, , Breacher is given his team back. 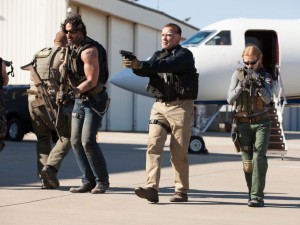 The casting of the team of elite DEA misfits was excellent: Sam Worthington as James “Monster” Murray was nearly unrecognizable, and it’s great to see Josh Holloway (Sawyer from “Lost,” here as Eddie “Neck” Jordan) in a film again. However, I’d say Mireille Enos easily stands out as the best performer of the crew – Enos plays Lizzie, who’s married to Worthington’s character and is the craziest of the bunch.

The film doesn’t spend much time trying to get the audience to sympathize with the characters. “Sabotage” is oozing with that hoo-rah tough-guy motif, but it doesn’t try to get you to care; while that’s not the worst crime a movie can commit, a B-movie needs SOMETHING going for it. At its core, this is a revenge movie: there’re plenty of great revenge flicks that Ayer could have drawn from; instead, we end up with this hollow, confused film. Absent are Schwarzenegger’s witty quips, absent are the memorable villains, and absent is a motivation for the audience to care about these characters. 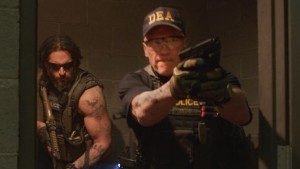 David Ayer’s last effort, “End of Watch,” was an intense story about law enforcement carried by a great cast – it was shot in a found footage-like style, which gave the story a documentary feel that worked perfectly. “Sabotage” doesn’t have any look at all: everything felt super plain, and though there was obviously some production design involved in certain scenes, nothing stood out.

I left the theatre wondering if the films title, “Sabotage,” might indicate a deeper meaning to the film. Its original titles were “Breacher” and “Ten” – perhaps choose the title “Sabotage” was a jab at the studio by the filmmakers who turned this film in under duress. Or, maybe, I’m trying way too hard to give the film some credit.