The simple act of reading a plot description can easily skew your predisposition one way or the other. Going into a film with the bare minimum of understanding can occasionally yield fantastic results. The film landscape is a varied one, and the deluge of blockbusters are merely a screen blocking some decidedly different fare. A great cinematic experience need not be limited by budgetary constraints, or to those with bombastically produced set pieces. Locke shows that when you execute the components properly, extravagance is unnecessary.

Ivan Locke (Tom Hardy) is a well-respected construction foreman. Admired by his coworkers and celebrated by his superiors, he is a no-nonsense man of action with a stern set of values and sensibilities. Tonight, Ivan is not acting like himself. With his largest cement pour in history looming over him, he gets into his car and drives off. Now on the road, his cell phone is his only connection to all those that his decision affects, in both his professional and personal life. 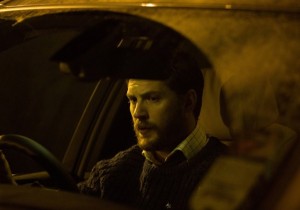 Many films get classified as character studies, but even then they possess a bit more frills and dressing than Locke. In no way detracting from these others, Locke is the most intimate of character pieces. As I exited the theater, I struggled to think of a modern film that so confidently secluded its lead, removing them from all those that he will come to interact with. In all my contemplation, Buried was the only one that came to mind. It seems somewhat appropriate, as the two films are both about the struggle to survive and reclaim life. But where Buried possesses a powerlessness in its lead, Locke is about a man exerting as much power as possible. Ivan Locke is in this situation because he chose to be there, not because something went dramatically wrong. He is a man aware of his consequences, and merely trying to salvage what remains.

All those that interact with Ivan over the phone express their disbelief with his actions. He is heralded as a man to be trusted and counted upon; a faithful and respected leader. However, this is not the man we meet. Ivan has crumbled and his pieces are strewn all about. Tom Hardy, absent from theaters for far too long, runs a master class in restraint. Hardy becomes Ivan, and everything from the time he takes to answer the phone to the way he transforms his tone based on his audience, represent choices that never read as anything less than authentic. He conveys the shattering of his very core, while maintaining a resilience to recover that somehow lives between admirable and despicable. Hardy knows that the 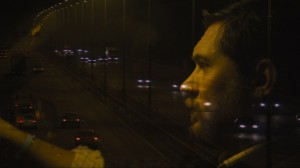 old Ivan is gone and like the character, never wavers from the man he has now become. It is his performance that sucks you into the film, and crafts palpable suspense. His tension becomes your tension, and the mere act of watching this man cope is uncomfortable in its realism.

By limiting the location to only the car, writer-director Steven Knight places his character in his own cage. Knight does not let the singular location limit his visual canvas, and employs multiple different angles, even shooting Hardy indirectly through reflections. While surrounded by his own reflection, Ivan avoids seeing himself completely. He hides behind his steadfast decision. However, Knight delicately shows that his sheen of confidence hides a man in frenzy. As the ride carries on, his car becomes increasingly disheveled. The man has been broken, and his pieces continue to tumble off of him before our very eyes. At times, Knight’s aesthetic becomes repetitive, especially in his choice of establishing shots outside of the car. I hoped for the world to change with Ivan, mirroring his inner chaos. But Knight does not change his style, with far off lights gently coming into focus throughout the entirety of the film. Perhaps that was Knight’s point, no matter what occurs within the confines of the vehicle, the world continues on, uncaring of those riding its surface.

Hardy plays Ivan as measured and precise. He chooses his words carefully and with particular regard, with those choices shown to be finite and concrete. This is a man that believes that he can fix the world by doing what is right. The problem is that the world is a palette of grays and often it is unclear what is truly right and wrong. His plans begin to dissolve and his confidence dwindles, yet somehow he manages to keep his emotions in check. Through his discussions with an absent father, a cinematic choice that should not work as well as it does, we finally begin to the see the man that Ivan truly is. Knight wisely draws in a backstory while avoiding default exposition. Hardy’s anger seethes, but the truth of his emotion doesn’t come through until he is faced with his family. His son is the one thing that can break Ivan because it is through him that he is able to see himself most fully, and as his pieces fall away, we feel his heartbreak. Locke excels in honest emotionality, with Tom Hardy delivering a performance of raw intimacy. It is not a film to leave you feeling satisfied, but rather a piece of reflection that is executed precisely to make you feel like the only one watching regardless of your company.

Watch the Q&A from the IFFBoston Screening here.

Be sure to follow Derek on Twitter @DerekDeskins to stay on top of his latest film reviews.