For many students entering film school, “The Filmmaker’s Handbook” is their first purchase at the bookstore. Essentially a bible for film students, this “The Filmmaker’s Handbook” was co-written by Ed Pincus, the main subject of the movie “One Cut, One Life.” An intimate and personal film, “One Cut, One Life” is filmmaker Lucia Small’s story of herself, and her friend, Ed Pincus, who has been diagnosed with a terminal illness.

When Ed receives the news, Lucia and Ed realize that a project documenting his battle could be their last chance to work together. The film moves in chapters, introducing Lucia and Ed’s relationship, as well as showing some of the personal documentaries that made up much of Ed’s career prior to his retirement. We learn that Lucia brought Ed back into documentary filmmaking, and how much of an influence he had on her work leading to their collaboration. 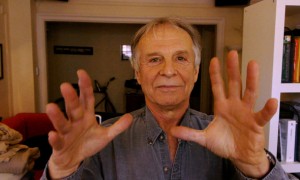 Lucia shares many of her feelings on Ed’s illness, as well as dealing with the tragic loss of two other close friends within a few weeks of each other. In some ways, Lucia’s documentation of Ed’s journey is a way of dealing with her grief, as well as creating a permanent record of Ed’s legacy.

Films that focus on the personal struggles of someone suffering a terminal disease can be incredibly difficult to watch; Lucia opens everything up and leaves the audience with such a strong sense of knowing her, Ed, and their close relationship – “One Cut, One Life” is one of the most personal documentaries I’ve seen in a long time.