Into the Woods opens in wide release on Christmas Day, December 25th. Check your local listings for showtimes.

Adapting stage musicals to the big screen is hard. While the screen may loom over the audience like some all-encompassing monolith, it still never feels big enough to capture the spectacle of live theater. Compounding the problem is the runtime limitations that your average cinema tacitly dictates. If you intend on being a three-hour, or longer, film you better come bearing a highly respected director or plenty of scenes that can be described as epic. So until Hollywood decides that musical adaptations merit four-hour runtimes on IMAX screens, what will remain are a few bright spots in a field of the unexceptional. Into the Woods fades rapidly into the expanse of mediocrity. 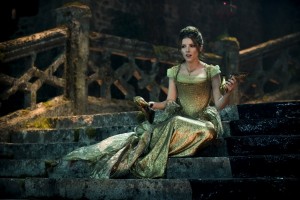 The film has everything you should expect from a Christmas release. It comes from Disney, so its family-friendly pedigree is strong. It is full of well-crafted and catchy songs, coming from the pen of master musical theatre writer Stephen Sondheim. And its cast is positively overflowing with actors of talent, and even more so, immense likability. Once all of the presents are unwrapped and families are looking for something that will make the kids happy and not offend grandma, this will be the film to see. Unfortunately, when you shoot for that middle area of likability you tend to land squarely in that space in terms of quality.

Don’t get me wrong, there is plenty to be enjoyed in Into the Woods. The cast alone is spectacular, delivering not only the necessary acting chops but musical prowess as well. Movie musicals are decidedly different than stage musicals, and the entire adult cast gets this. Anna Kendrick, Emily Blunt, and James Corden transition into song gracefully and without bombast. Their numbers are enjoyable while not being transfixing enough to urge you out of your seat. Meryl Streep continues to be her fantastic self and although she is certainly not as enthralling a Witch as Bernadette Peters she is perhaps the best we could expect from a feature adaptation, balancing the showy and small moments. The child cast however did not get the memo on this not taking place in front of a live audience. They act to a back row that isn’t nearly as far away as they think it is, pushing the limits of the annoying to an insufferable level.

Although Meryl will get the awards love, the true standout of the film, and the absolute best reason to pay for a ticket is Chris Pine. He has more fun with his single part than the entirety of the cast, becoming Cinderella’s Prince with full arrogance and charm that leaves you cursing yourself as you melt into his eyes. I don’t know that Chris Pine is a leading man, Jack Ryan: Shadow Recruit may have effectively sealed that coffin, but he could, and should, make a career out of these strange character roles. Between this, Horrible Bosses 2, and Stretch, Chris Pine is fast becoming the reason to see less than great, and usually cinematically flawed, films.

Unfortunately, the cast can only carry this film so far. Into the Woods often falls victim to the perils of cinematic musical shrinkage. As the filmmakers try to pare down the lengthy stage version to a more palatable-to-the-masses runtime, they start hacking off bits left and right. Rather than looking to full sections to excise, they flit between their devotion to a shortened runtime and an attempt at fan service. The Rapunzel section could have been largely removed, and most of it is, but to can it completely would leave fans without “Agony,” and we just can’t have that. Same with the Little Red Riding Hood bit, although I am struggling to understand any reason for keeping that, and 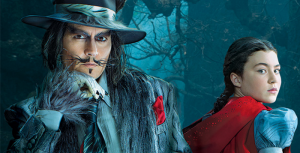 no it assuredly is not Johnny Depp as the Wolf. As edges are clipped, the film ends up feeling both overstuffed and incomplete; neither a great adaptation, nor a great film.

Into the Woods boasts so many elements that should have made for a great adaptation. The original team was involved, with author James Lapine actually writing the screenplay and the music going largely unchanged. On top of that, the cast is full of not only recognizable, but talented actors. When you start to pick at the pieces however, you see how it fell apart. Disney was not interested in putting together an honest adaptation of the musical but a family friendly box office sensation. As a result, much of the bite of the original production was scrapped in order to achieve a PG rating. Elements and story bits were trimmed slightly, achieving a shorter runtime, but sacrificing story and an overriding sense of completion. I also think we can move on from Rob Marshall as the musical feature director. Yes, he did a great job with Chicago, but Nine was a travesty and this is only slightly better (and not because of his direction). In the end, Into the Woods is an inoffensive musical adaptation that will humbly satisfy the majority of its viewing audience; but by late January, I don’t see many remembering it.

Get more movie talk or tell Derek how wrong he is by following him on Twitter (@DerekDeskins).