David Modigliani’s last film at IFFBoston was “Crawford,” which screened back in 2008. One of my favorite parts of the Independent Film Festival of Boston is when talented filmmakeres are invited back with their new works – it’s always great to see how much they’ve progressed in the craft. “61 Bullets” is no exception.

In September of 1935, there was a violent shoot-out in the corridors of the Louisiana State Capital – as the smoke cleared, Huey Long, U.S. Senator and former Governor of Louisiana, and his alleged assailant, Dr. Carl Weiss, a respected surgeon, were both dead. Mystery surrounded the entire event. Why would a successful doctor with a young wife and 3-month-old baby seek to attack a powerful Government official? 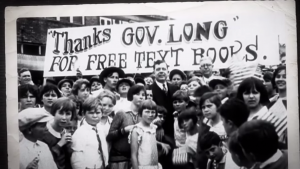 Through members of the Long family, Dr. Carl Wiess Jr (the son of Dr. Weiss), and others who were alive at the time of the shooting, we learn more about what happened. We get a detailed background on Huey Long and his political career leading up to that fateful day, what kind of effect the “assassination” had,and people’s theories. Ultimately, the audience is left to draw our own conclusions of what actually took place. 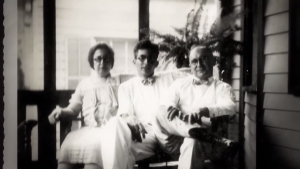 As the film walks through the step-by-step “official” account of the story, the camera swoops around the State Capital hallway. While there is no reenactment, the narration is so descriptive, and the groundwork of the characters is so well-laid, you can almost see the ghostly reflections trapped in time within the walls of the marble hallway.

The filmmakers put together a great collection of archival footage and historical stills. The titles and their great background texture stood out to me specifically, as well as their use of noise/grain on the various archival photos. I point this out because not enough filmmakers take the time to actually liven up their photo scans outside of your typical “Ken Burns Effect,” and it really adds an extra polish to the work. Another stand-out in the film’s polish was its excellent score from Jeff Luna, David Rice, and William West. 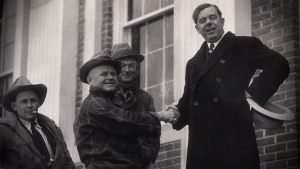 Part of me hoped that “61 Bullets” would end with a major revelation, a huge turn – “this is what happened and look how it was covered up,” but that never happens. The filmmakers set out to show how an event, even one as recent as 75 years ago can still be surrounded in mystery. History has a way of shifting, the story changing as it’s passed down through time. In the case of Huey Long & Dr. Weiss, we may never know what exactly happened.