“I Am What I Play,” from first time director Roger King take a handful of really well known DJs from prolific American Ardio Markets and tells their story. With personalities likes Charles Laquidara (Boston), Pat O’Day (Seattle), Meg Griffen (NYC), and Toronto legend David Marsden (aka David Mickie) – we move through their personal stories with a colorful backdrop of the music of the era.

The Golden Age of the Rock & Roll DJ started in the 60s, and started to see its decline in the late 80s and early/mid 90s. Whether it was their discovery/promotion of the next big Rock stars, or their edgy humor and politics, these DJs had an enormous influence over the direction of the music industry.

There’s a great use of archival footage here – we move from story to story, and get to hear samples of some of the great music of the period, The Ramones, Jonie Mitchell, The Cars, Rush, Velvet Underground and more. 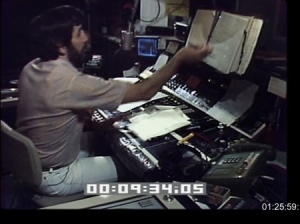 While the film covers an enormous amount of detail chronologically, it lacked a narrative cohesion between the various subjects. I definitely found each person extremely interesting, however, I didn’t like the pacing of each subjects story. We seemingly randomly intercut between them to mix it up, rather than any true connection outside of them being contemporaries. I think the method works for audiences who have specific interest in what is being told, but I think general audiences need a bit more narrative structure. There’s some interesting cutting as we move from city to city with some fast paced Scorsese/Schoonmaker style b-roll sequences that definitely liven things up.

I enjoyed the film, seeing a snapshot of what rock radio used to be was interesting as much as it was entertaining. “I Am What I Play,” will strike a nostalgic chord for those who remember when radio was at the forefront of the music conversations – for people who grew up in the iTunes era, well, there’s no hope for those people anyways.