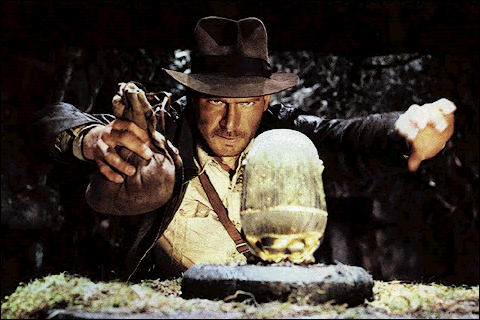 In honor of Harrison Ford and his return to one of his most famous characters, Indiana Jones. I want to to celebrate his career, by looking at all the good times we’ve had, with Mr. Harrison Ford.

Hey Harrison, remember when you were plucked from a career of carpentry and cast in a small role in this film inspired by George Lucas’ life growing up drag racing and picking up chicks in his sweet hot rod? You’d built a career playing small non-speaking roles in a few feature films, and bit parts on Universal Television series. It was only when an emerging filmmaker hired you to build his cabinets, that he cast you in the small role of a hot rod driving out to dethrone John Milner, who drives the fastest car in the valley. It was a fun film, and starred many other young emerging actors, Richard Dryfus, Ron Howard, and Cindy Williams. You mighta had three scenes, but there was no doubt that you stole the show.

It wasn’t till years later that you truly made your mark on film history. George Lucas cast you as a hot shot smuggling space pilot. Hired by Obi-Wan Kenobi and Luke Skywalker to transport them and a special droid to Alderaan. From a life of illegal smuggling, to a life of working for an illegal rebellion against the Empire. Han Solo, a character who was only out for himself and his partner, Chewbacca, finds it in him to stay around and help the rebellion. Harrison, your embodiment of this iconic character is one of the many roles you are remembered for, a charming, funny, romantic, and bad-ass space jockey. Oh, and we’ll always remember that you shot Greedo first, its better that way.

Indiana Jones and the Raiders of the Lost Ark (1981)

Remember when you donned that infamous fedora, leather jacket, and bullwhip? You were after the famous Ark of the Covenant, an artifact in the eyes of Hitler and his army. Not only were you good at outsmarting Nazis, but in your day life, you were also a professor! Thank God you were cast here, your friends Spielberg and Lucas almost brought Tom Selleck into it, and with all due respect to Mr. Selleck, you are just a little bit more the speed the character needed. You weren’t an invincible superhero, but an adventuring everyman out seeking fortune and glory. 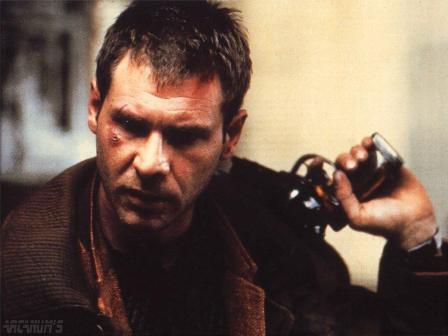 It wasn’t quite a huge change of pace for you, as you’d already starred as one of Science Fictions greatest hero’s. But there was something much darker about this dark Ridley Scott film, adapted from a novel by Philip K. Dick. It’s 2019, and your character. Rick Deckard, is brought out of retirement to hunt down and retire (aka kill) a Nexus-6 replicant. The film reached cult status, but did not bring the success that your previous efforts had. Despite its lack of business, this film is most certainly a “good time” with you Harrison.

Taking the reigns of a character from another actor is never a simple feat. You stepped into the shoes of Jack Ryan, author Tom Clancy’s own James Bond type character. A CIA Analyst on the fast-track, you save the Prince and Princess of Wales, and put your own family in harms way by serving your country. Jack Ryan is not quite an adventurer like Indiana Jones, or Han Solo, but an interesting character, an unwilling Political pawn. The films were quite entertaining! 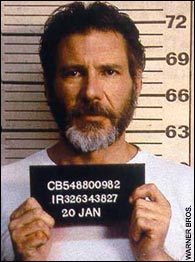 After playing so many iconic roles in all these various trilogies, you departed from them, playing a police officer protecting an Amish boy in ‘Witness,’ an inventor building an anti-establishment paradise in ‘The Mosquito Coast.’ But one of my favorite films in your late 80’s early 90’s period was your bout as Dr. Richard Kimble in ‘The Fugitive.’ Accused of killing your wife, you escape from incarceration, and seek to prove your innocence. The film was nominated for 7 Academy Awards including Best Picture. The man who played the U.S. Marshall on your tail, Tommy Lee Jones, took home an Oscar for Best Supporting Actor. You deserved one yourself, but that’s okay, you aren’t bitter about it.

See Harrison, we’ve had plenty good times. Seeing you embody so many everyman roles has always been entertaining for us the audience. Though, there have been some choices we haven’t been too happy about (Six Day Seven Nights, Hollywood Homicide, Firewall), and there are times you make us nervous, but we’re glad to see you back as Indiana Jones. We’ve all been waiting a very long time, but, we all know you and the gang won’t let us down.

One thought on “Good Times with Harrison Ford”