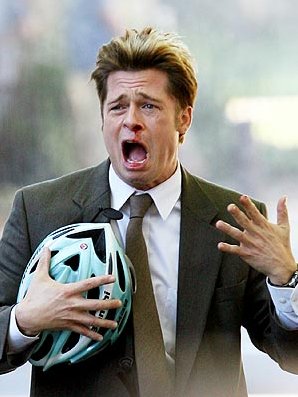 The saying that life is a tale told by a fool might have been talking about the latest movie by the Coen Brothers, ‘Burn After Reading.’  Even though it’s set in the world of intelligence there is very little of it going around.

As the film opens, Osbourne Cox is being demoted at the CIA for a series of issues, most notably, his drinking problem.  In a fury, he quits and decides to write his memoir.  (Pronounced ‘Mem-roi’ by John Malkovich as Cox.)  His wife is having an affair with a hot-shot government agent and she’s in the process of beginning divorce proceedings.  However, a disc containing the first few chapter’s of Cox’s book ends up on the floor of a women’s locker room at Hardbodies, a local gym.  Linda and Chad both work at the gym and see how the contents of this disc could change their fortunes forever.

However, none of the people mentioned above are all to bright.  So, the continuous espionage and deceit goes horribly awry early on in the story.

George Clooney is a not-too-slick womanizer.  Brad Pitt is an exercise-obsessed personal trainer.  Frances McDormand is a looks-obsessed gym manager.  And John Malkovich is an agent at the end of his rope, trying to hold on as the rope keeps fraying.  Everyone in the cast is excellent; each one does an excellent job playing against their usual character.

With an excellent cast, it’s a shame that the whole film doesn’t come together.  ‘Burn’ is definitely one of the Coens lesser films, perhaps because it doesn’t aim to be anything more than a silly comedy that you forget shortly after leaving the theater.  Some of the disappointment in the film surely comes from the fact that such a cast doesn’t completely gel and fit together.

And, unfortunately, that’s it.  ‘Burn’ just doesn’t add up to anything more than the sum of it’s parts.  While that’s okay for most comedies, one expects more from the Coens.  And while not all of their films are a great statement about life, (I mean, The Dude doesn’t really say much about the human condition… I think,) it’s just not fun enough to be silly.  The film ends up in the middle of the road.  And that’s not where the really funny stuff ever seems to happen.  -Sam