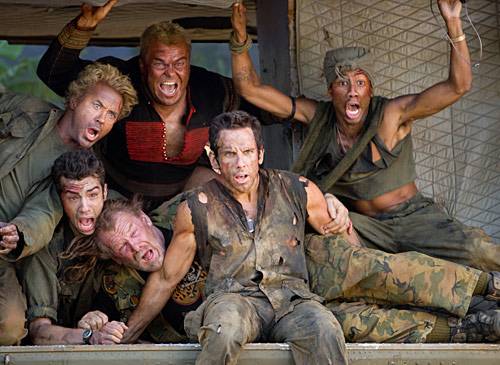 Ben Stiller’s second directorial effort is a kitchen-sink affair, no joke is to low, no explosion is too big. Sending up actors and their craft, as well as the ridiculousness seemingly inherent in filmmaking, ‘Tropic Thunder,’ is an assault on the senses that, at the same time, is kinda boring in some spots.

Stiller stars as Tug Speedman, an established action star who is seeing his star fall, so he signed up for a Vietnam movie, after his previous grab at awards and honor was shunned by audiences and critics. Robert Downey Jr., is Kirk Lazarus, a five-time Oscar winner, who is so immersed in his character, that he has his skin darkened so that he can play an African-American character. Their exasperated director, played by Steve Coogan, cannot take it and tries to get the actors out of their self-centeredness, decides to drop them in the jungle, tell them he has cameras hidden in the trees and force them to fight their way out. However, he is killed by an errant land-mine almost immediately after the drop. Speedman is captured by a drug cartel and held hostage, despite his disbelieving agent and studio head. The actors have to band together, drop their quirks and become cooperative, functioning members of society.

What makes this movie fail, in many ways, is the size of its budget. It’s too big. Perhaps the subtitle to the movie should be, ‘Just because you can blow up the jungle doesn’t mean you should.’ The movie rocks and rolls along for two hours, with the volume knob turned up to eleven and then broken off.

The performances are solid and everyone is wonderful, with Downey Jr. and Jack Black standing out. Tom Cruise’s sort-of cameo has been talked about endlessly, in breathless tones, that his, over-sized, fat-suit and bald cap is worthy of attention. It is only amusing for a few minutes. However, because everything else in this movie is super-sized, scene after scene shows Cruise cursing and grabbing his crotch. I get it, it’s so disgusting, it’s funny. Can we move on?

And that is the problem with ‘Tropic Thunder.’ Too much, too often and too loud. The premise is a wonderful basis for a movie. However, there is very little to follow it up. We get it, actors are an over-indulgent lot. Can we have another joke please?

The other problem is one that befalls all action-comedies. At some point, you need to stop the comedy and move the plot along with the action. And then you’re left with characters you don’t really care about except to laugh at, in situations that require an emotional response from the audience.