Two of my most favorite shows have gone off the air, and I thought despite Lonelyreviewer.com only covering Film recently, I’d like to do a review/write down my thoughts for a significant week in television. There will be spoilers herein, so please take care, if you plan on watching them in the future, or aren’t caught up, I will be discussing the shows in detail. So. One more time SPOILER ALERT.

Despite a lackluster past few seasons, the creative team behind 24 pulled out all the stops in what became the shows final season. Moving the locale to New York City 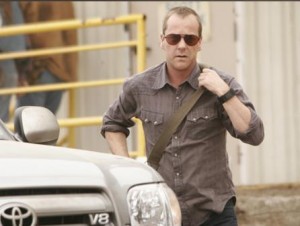 (something as a fan I’d wanted since season 5), we joined Jack Bauer as he’s brought in to provide his usual assistance on the eve of the signing of a historic peace treaty.

The producers admitted recently that they didn’t make too many changes the way the season was going to play out despite it being Jack’s last outing on television. However, it certainly did feel like at least in the last 6-7 episodes, they pulled out all the stops. Jack became even more vengeful then he’d ever been, out for blood, to hurt everyone responsible for the death of his friend and now lover, Renee Walker.

In the series finale, we watched Jack, despite wanting nothing but to kill everyone responsible, be talked down by his long time friend Chloe O’Brien. The most touching moment of the finale came in its last moments, when Jack, having been saved once again by Chloe’s intervention, Jack thanks Chloe for all her dedication, and friendship over the years. It was a great moment in television, and we watch Jack run via a drone feed.

The finale is a total set up for the film, but, I’m ok with that, I think it was a classy way to end the show.

The debate behind this has been raging, people either love it, or are frustrated by it. I’m 100% completely satisfied with how everything played out, and I’ll tell you why. 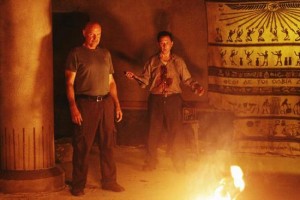 We’ve had a season full of answers, what the deal is with the smoke monster, what the island is, who is jacob, what the “numbers” represented. From day one, showrunners and exec producers Damon Lindelof and Carlton Cuse have said that ‘Lost’ has always been a story of the characters. Flawed, but at the same time, special, the passengers of Oceanic Flight 815 were brought together by fate, to a mysterious island. They’ve traveled through time, they’ve been shot at, attacked by polar bears, drowned, kidnapped. You name it, these guys went through a lot.

This last season started with what we eventually called a “sideflash,” where the plane never crashed. What we learn in the finale is, this “alternate reality,” is a purgatory of sorts. A world created by them, which gives them a chance to relive their lives the way they wanted, the ideal way. Of course, there is no happiness either, and realizing that they were in a false world, helped them “pass on” or “move on.”

It was beautifully put together, sure people are upset at the pile of things they didn’t explain, but to be anymore detailed would have been dumbing down the show. I applaud them for sticking to their vision, and like I said, I’m completely satisfied with this finale (albeit, sad, but I know I’ll be rewatching from season 1 soon). I think the episode was the best of the season, cinematically epic, and the best 2 hours and 30 minutes of TV (with commercials) I’ve seen. Ever.

So, now what am I watching? The Summer is here, so I’m going to have to play some catch up, maybe I’ll finally pop in ‘The Wire’ box set thats been sitting next to my TV for weeks. Here’s hoping for some great new shows this fall, anyone watching V?