It’s hard to identify who in audiences is really clamoring for remakes. Rather than genuine excitement, many of these remakes are greeted with muted expectations. They feel like a tent of oddities, people filing in just to see how weird things are, only to be disappointed that most of the freaks are only taxidermy experiments. It’s not that remakes can’t be good, just that the majority of the time, they completely miss the point. The beloved nature of the existing property, a selling point to many executives, only serves to hinder the cinematic possibilities of the product. They hope to be different enough to merit their own existence, while not being too far removed from their predecessor. The new RoboCop falls into this exceedingly bland trap. 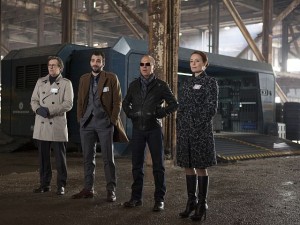 The year is 2028 and OmniCorp has revolutionized the way in which America handles international disputes. Fleets of robots have replaced soldiers, allowing America to continue its campaign for worldwide “peace” without the pesky loss of Americans. Despite his success in the defense field, OmniCorp CEO Raymond Sellars (Michael Keaton) wants to push his wares on a domestic terrain. Unfortunately for him, a “robophobic” Congress will not allow unfeeling robots to police the streets of America. In hopes of finding a way around the impenetrable bill, Sellars devises a plan to introduce a human element into his suite of robotics. When Detective Alex Murphy (Joel Kinnaman) falls victim to a nearly fatal car bomb, Sellars is presented the perfect subject for his new program.

The original RoboCop was such a product of its generation. An ultraviolent cop film, set in a dystopic future that also served as a takedown of an overbearing business culture with a focus on the dehumanizing effect of greed. On top of all of that, it was directed by Paul Verhoeven, who has such a distinct style that flirts with exploitation while not fully careening into B-picturedom, that is until he made Showgirls. This was a film of the 80s, for the 80s. A straight remake of the film would illustrate a gross misunderstanding of its accomplishment. To th

e remake’s credit, it does a respectable job of establishing itself as its own entity. In the same vein of the original, this film is a product of its time. The themes of defense, the dysfunctional marriage of business and politics, as well as the pigheadedness of a 24-hour news cycle are integrated nearly seamlessly into the film. But while the remake does a decent job of crafting an identity separated from the original, it fails to recapture the invigorating spirit that made the first so memorable. 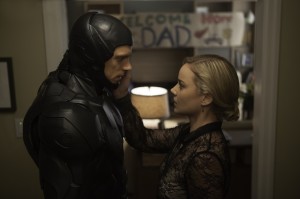 The roster of acting talent within the film alone is intriguing on its own. Even smaller roles are handed to actors who are, honestly, above this caliber of film. Joel Kinnaman does an admirable job in the title role. He is given much more on the page to work with than even Peter Weller was the first time around. Alex Murphy is not dispatched quite as quickly, and in the short time before he dons the armor, we get an image of the man he is. The problem is that this man is little more than a stock good-hearted police officer. His work in the actual suit is much more intriguing. This time around, Murphy is not robbed of his soul as quickly and as a result we are allowed to see him struggle with his new station in life. The family story is boosted as well, and it adds an emotional weight that the original was lacking. In this way, the film is able to dig a bit deeper into the question of what makes a person human, and the very importance of the subsequent answer. Often, this dips into the saccharine, but there are some conflicts that the film is smart to leave unsolved, helping to elevate an element of the film that becomes surprisingly relevant.

Unfortunately, the majority of the film is not as successful as these fleeting moments, and it all ends up registering as a bit under-seasoned. 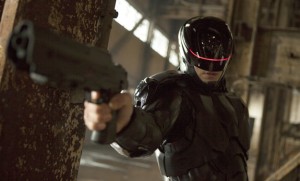 The action is serviceable, although occasionally the camerawork is so frantic as to make the events borderline incomprehensible. The script is pedestrian in its reliance on exposition. Rather than showing the audience, the script goes the route of incessant telling. If we are to judge only by appearances, the Detroit of 2028 is doing a lot better than 2014, and it presents little clear need for a robotic officer. There is the requisite corruption, coming off as little more than an afterthought, and rather than a criminal that borders on terrorist, we are treated to familiar mob stereotypes. Instead of a cutting indictment of existing bureaucratic structures, or a go-for-broke attitude, this RoboCop serves up mediocre action and a familiar structure that is bogged down with leaden dialogue. 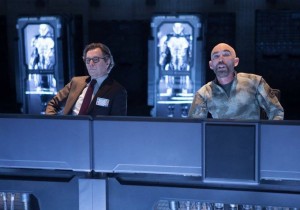 Often times, the film feels like the product of copious studio notes. There are morsels of a good film in here, however everything is so exceedingly polished as to rob the film of a necessary edge. The very spirit of RoboCop is absent, replaced by standard tropes and CGI infused gunplay. The paint-by-numbers plot is given more importance than active character development or thematic discussion. Where the original RoboCop was decidedly that, a piece of original film that defies recreation, this new RoboCop is a flimsily mass-produced action figure. There is little to set this film apart, and not even a Samuel L. Jackson diatribe,

complete with trademark language can rescue it from a field of familiarity. The glimpses of a better film make the overall experience all the more disappointing. There are snippets of thematic grace and a dash of near camp that coalesce in an attempt to make this a notable experience, but in the end, the studios have done just what our first RoboCop would have done to a rapist, completely neuter it.