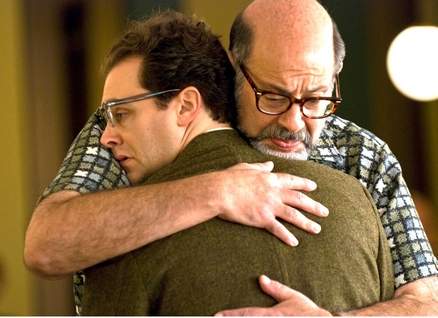 Larry Gopnik is trying to be good.  He is a college mathematics professor, awaiting word on his tenure.  However, a failing student is trying to bribe him.  His wife wants a divorce.  His brother is living on his sofa.  And his son is struggling with the kids in his class as he prepares for his bar mitzvah.  It’s the kinds of troubles that Job might walk away from. But Larry wants to be good.  He is striving to do the right thing.  In such a world, is there ‘a right thing?’

“A Serious Man,” is Joel and Ethan Coen’s latest movie, following up “Burn After Reading,” and, in many ways, is much funnier than its predecessor.  However, something else is going on here.  It’s a simple movie in one way, but it’s also very complicated.  Much like Larry’s life.

As the story begins, Larry’s son, Danny, has smuggled in a radio to his Hebrew class, so that he can listen to Jefferson Airplane while the teacher is droning on.  However, he is discovered and the radio is confiscated.  Unfortunately for Danny, he has also hid the $20 he owes the class bully in the radio.  Without the offending object, he has a mark on his head by both the teacher and the bully.  His dad Larry isn’t faring much better.  He returns to his office after teaching class to find a South Korean student who is currently failing.  He asks Larry to re-take the midterm.  Larry refuses on moral principles.  The student leaves, vowing to find a way to make things work out.  It’s then that Larry finds an envelope filled with money.  Was it left by the student?  Does he take it?  What’s the right thing to do?  Arriving home after the encounter, Larry walks into a tornado of family troubles.  To go into greater detail would spoil the story.

The Coens are on familiar ground here, setting the story in their home state of Minnesota, at roughly the same time that they were coming of age.  If it is at all based on elements of real life, (something I doubt the Coens would ever comment on truthfully one way or the other,) it certainly shows how the brothers got to see the world from their slanted point of view.

“A Serious Man,” is a slow-burn of a movie.  One that keeps piling problem and distraction on to of problems and distractions.  You feel for Larry because you sense his goodness and his drive.  However, he is constantly intercepted at every turn.  And while he grows more and more frantic and harried, the audience seemingly delights at every twist.

The costume and set design are perfect in evoking the era.  And the sound design truly stands out, making every little detail more intense, more important.  Which such attention to detail on the sound, you easily get lost in the story and in the plight of Larry Gopnik.

The cast is also amazing.  The Coens eschew their usual company of actors and instead pull together a wonderful cast, most of whom you probably don’t know.  Michael Stuhlbard is wonderful as Larry.  Other actors include Richard Kind, Fred Melamed, Aaron Wolff and Amy Landecker.  All hitting the right note of absurdist and seriousness required.

This is one of the Coens best.  One where, like many of their best, you can honestly say you have no idea where it’s headed.  Everything fits together so incredibly neatly and well that all you can really do is shake your head in amazement.  “A Serious Man,” has quickly jumped to the top of the list of great Coen movies.  Given it’s plot and it’s story which bubble under the travails Larry, it’s easy to see how this movie could be forgotten or overlooked.  Don’t let that happen.  “A Serious Man,” is one of the year’s best.  -Sam