At this point we are pretty deep into the Marvel Universe. Fully into Phase 2 of their master plan, we have now had three Iron Mans, two Thors, an Avengers, and now a second Captain America, with Guardians of the Galaxy just around the corner (also, do we mention Hulk, or is Marvel just as unsure of that property as we are?) We have been delighted by Iron Man, and then disappointed by him, while continuously being confused by Thor. The Avengers was suitably great, albeit largely because Marvel had the good sense to pick up Joss Whedon. Amidst all of this, Captain America has gone a bit under celebrated in the larger scheme of things, despite his character featuring prominently in the overall Avengers story (he is the leader, for God’s sake.) That just might be changing with Captain America: The Winter Soldier. 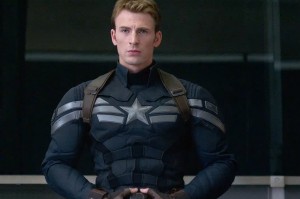 Following the aftermath of the attack on New York, Steve Rogers (Chris Evans) is living in Washington, D.C. He is still finding his way through the present world, although with a much better handle on things, as he continues to work for S.H.I.E.L.D. He is called to assist in the rescue of a S.H.I.E.L.D. vessel overtaken by pirates. During the rescue, he catches agent Natasha Romanoff (Scarlett Johansson) downloading data from the ship’s computers. Having been kept in the dark as to Romanoff side-mission, his apprehension in trusting S.H.I.E.L.D. is only heightened. After returning to D.C., Nick Fury (Samuel L. Jackson) reveals Operation: Insight to Rogers, a system of three Helicarriers, which link into existing satellites to preemptively eliminate world threats. As Fury is attempting to access information on Operation: Insight, the same information Romanoff extracted on the previous mission, he is confusedly denied access. It is beginning to look like S.H.I.E.L.D. may not be as in control as it appears. 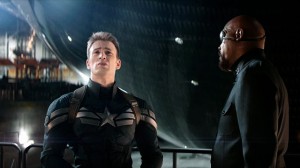 The strength of the Marvel films are their self-knowledge. Ultimately, they all deal with specific themes, or in most cases villain types, that carry throughout their multiple sequels. Iron Man deals with big business and international terrorism; Thor faces the meeting of Earth and the alien while dealing with the struggles of family; and if we want to bring Hulk into this, it is all about the inner struggle with one’s self. So where does Captain America fit in? Captain America, like his moniker, is about America and everything it looks to represent. The interesting thing with this character, is that we are allowed to see how the image of America is mutable, evolving as the calendar pages fly away. The world around Steve Rogers changes, but he remains steadfast in his beliefs; beliefs that have trouble addressing the changing world. Captain America initially faced a clear foreign villain, a group so very close to Nazism that believes in a ruling class; but this time around the villain is blurry, mixed in amongst the good. Through it all, however, Captain America is forced to battle those that believe they are superior and know best. 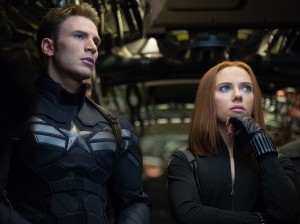 The Winter Soldier may be the bravest Marvel film yet. There are choices made that not only have deep ramifications for the future of this universe, but drastically reconfigures the films that have come before it. What’s impressive, is that it makes these striking decisions organically without a hint of feeling forced. There is a suspension of reality inherent to the superhero franchise, but this film ends up coming across as grounded and real. While, The Winter Soldier is certainly a superhero film, it is much more so a political thriller with action sensibilities. This speaks directly to the strength of the directing from brothers Anthony and Joe Russo. They merge the incredible feats of its characters into our world. Rather than just dumping CGI, the action is live with real flames and true vehicular damage. The audience is drawn closer to the action, the stakes are more palpable than when it’s made up of ones and zeroes. The fact that the car chases, gun battles, and numerous fights are well choreographed and shot with urgency and close proximity, propels the film forward with such kinetic energy and mesmerizes more than many action films of today.

One of the film’s major themes is the unknown and two-faced nature of governmental organizations. Chris Evans knows how to mx just the right amount of naivety and indignation into Steve Rogers, that he isn’t just his shield and costume. Captain America is the image, but Steve Rogers is the true American, embodying all that we remember of classic American values. Evans captures this pursuit of the good, right, and just authentically, allowing even grandiose monologues to avoid bombast. Rogers’ removal from time is a device that allows the screenwriters, The First Avenger alums Christopher Markus and Stephen McFeely, to gently comment on the confusing stance of America. It is shown to be a country with good intentions lost in its own deceptions; showing how freedom can be lost in its own pursuit. The commentary isn’t preachy, and is shown to be actualities that only Rogers is able to call into question. For the rest of the world, the change has been gradual, but for Rogers it is sudden. He has been dropped into the middle of a thick wood, immediately recognizing the group to be lost, whereas everyone else has been walking for far too long to notice. 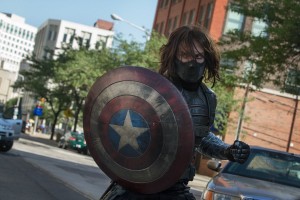 The Winter Soldier comes across as the first true sequel to The Avengers. Not that Iron Man 3 or Thor: The Dark World do not have their place in the second phase of Marvel’s cinematic universe, it is just they were not able to match the heights that Joss Whedon achieved. They fell into their old ways, and came across as additional filler until next summer’s Avengers: Age of Ultron. This film continues the growth of its characters all well advancing the greater story. Whedon’s steady hand allowed female characters to break out of poorly constructed ideas of gender, and The Winter Soldier is more than happy to accept that as fact. Scarlett Johansson is given the time and material to develop Natasha Romanoff, a character that is finally living up to the abilities of its actress. Sprinkle on top of that Cobie Smulders continuing to do much with very little and this film is a quiet celebration of the strength and importance of women in the Marvel universe. Captain America: The Winter Soldier is more than its genre, an exceptionally well-made political actioner with riveting action and more brains than most comic book films. Above all else, it just may be the most critical piece in Marvel’s larger game.