THE STRANGE ONES, based on the short of the same name by writer/directors Christopher Radcliff and Lauren Wolkstein is a slow-building layered drama that will leave audiences intrigued, or incredibly frustrated.

It opens with Jeremiah (James Freedson-Jackson) and Sam (Alex Pettyfer) on what seems like two brothers on a road trip. Mostly silent, we gather that the pair have left something in their rear view, as Sam tells Jeremiah to forget everything that has happened before.

We’re given small morsels of information, a damaging fire, the death of their father – Jeremiah seems to hold Sam somewhat responsible, if we’re to take any of his disdain and thousand yard stare at face value. The story keeps unraveling, slowly, and we learn that at every layer, not everything may be what it seems. 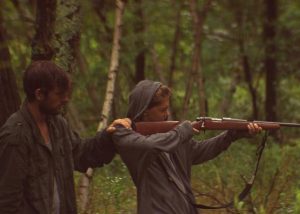 The film’s pacing and twists might frustrate some viewers. The filmmakers were in no rush to let the story play out, and didn’t hold back on changing direction. I wouldn’t say that Radcliff and Wolkstein throw the audience red herrings unnecessarily. As an audience its our nature to guess where the story is going, but with everything layered so tightly, it’s hard to jump to conclusions as to our destination.

Overall, THE STRANGE ONES is a complicated drama that is worth taking a look at as it makes its festival rounds.